The first lady used to act as if under duress. But she remains detached even after last week’s riot 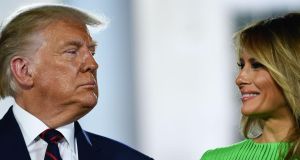 There is scant evidence to suggest that Melania Trump has had any kind of influence on her husband in the past four years. Photograph: Brendan Smialowski/AFP

You could barely make it up: shortly before insurgents stormed Congress while Mike Pence, Nancy Pelosi and other political leaders were inside, starting to certify the results of the US presidential election, Donald Trump, some of his children and a number of acolytes had been in a backstage tent, watching footage of the rally crowd to the strains of Laura Branigan’s Gloria, at what some commentators have described as a party.

First lady Melania Trump wasn’t there, mind. No, she was reportedly overseeing a White House photo shoot. For rugs. She’s “checked out”, a source told Vanity Fair. “She just isn’t in a place mentally or emotionally any more where she wants to get involved.”

Not that they were particularly adept at it in the first place, but the Trumps have officially lost the ability to read the room.

In the days since that afternoon, the Trumps have reportedly found themselves in damage-control mode, trying furiously to protect their next social and political moves. Melania is no exception. Reacting to last Wednesday’s events, she made her first comments on the White House website.

Despite the Save Melania online campaign that began on inauguration day in 2017, it’s now clear that she is nobody’s idea of a victim

“I am disappointed and disheartened with what happened last week,” she wrote. “I find it shameful that surrounding these tragic events there has been salacious gossip, unwarranted personal attacks, and false misleading accusations on me – from people who are looking to be relevant and have an agenda.”

Really????😠😡
Trump, Donald Jr, Kimberly Guilfoyle and others watching the crowd getting fired up hours before they stormed the Capitol, and dancing in enjoyment while the song Gloria is playing. Seems premeditated, no? pic.twitter.com/I28vs4XNf9

New: It appears @FLOTUS has copied parts of her statement today from ... herself. Significant similarities between statement today and her RNC speech from August: pic.twitter.com/S2V8YHIcuZ

Before expressing her condolences for those who died in the Capitol Hill attack, Melania added: “This time is solely about healing our country and its citizens. It should not be used for personal gain.”

In words that her husband has yet to express, she continued: “I absolutely condemn the violence that has occurred on our nation’s Capitol. I implore people to stop the violence, never make assumptions based on the colour of a person’s skin or use differing political ideologies as a basis for aggression and viciousness. We must listen to one another, focus on what unites us, and rise above what divides us.”

That she appears to have recycled an old speech to create yesterday’s statement one hasn’t gone unnoticed; it seems entirely in tune with the largely indifferent and detached way that Melania has acted as first lady.

Her unwarranted-personal-attacks angle hasn’t gone down too well, either, just as it didn’t last October, when Melania complained, on a leaked tape, about being criticised for her husband’s policy of separating children from their parents at the southern US border.

We can at least look forward to having a first lady who doesn’t have rumoured lookalikes, or doesn’t bitch about having to put up Christmas decorations

And despite the Save Melania online campaign that began when she scowled behind her husband’s back on inauguration day in 2017, it’s now clear that she is nobody’s idea of a victim.

Back then, reports abounded that she wept on hearing her husband had been elected president, and moved to the White House only under duress. Her apparent coldness towards Trump in public – a hand snatched away here, a flinch there – hinted at a marriage that was destined for the slab. And yet here they are, still very much together.

There is scant evidence to suggest that Melania has had any kind of influence on her husband in the past four years. Whether she has tried to is the big question. Her apparent lack of interest in the presidency or the role of first lady could be construed as complicity in Trump’s more outlandish actions and outrageous views: in not getting involved, publicly or otherwise, Melania has made herself one of Trump’s biggest enablers.

As the most awfully self-absorbed, dysfunctional and ego-driven administrations in living memory finally rolls its wagon off the White House lawn, we can at least look forward to having a first lady who doesn’t have rumoured lookalikes, or doesn’t bitch about having to put up Christmas decorations. The moment can’t come quickly enough.