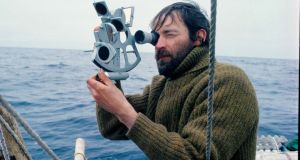 Tim Severin with sextant as the leather vessel the Brendan crossed from Ireland to North America.

The explorer, writer and film maker, Tim Severin, best known for the Brendan Voyage where he sailed from Ireland to Newfoundland to prove that the 6th century Irish saint could have reached the Americas 900 years before Columbus, has died at his home in west Cork at the age of 80.

Severin was born in Assam in India, the son of an English tea planter, but he was keen to dispel any notions of privilege when he spoke to The Irish Times in 1999. “We were very poor. The tea planters were not rich. The people who owned the plantations were rich but they were back in Scotland and England. My parents were poor.”

He was sent to boarding school in England at the age of seven and he later read history and geography at Oxford, and it was while he was still an undergraduate there at Keble College in 1961 that he sought to recreate his first ancient journey, retracing on motorbike Marco Polo’s 13th-century journey into Asia.

Six years later he followed in the footsteps of Spanish conquistadors and others sailing down the Mississippi river, but it was his decision to try to follow in the footsteps of St Brendan and cross the Atlantic in a leather-bound boat in 1976 that caught the public imagination.

Studying the Latin texts of the Navigatio Sancti Brendani Abbatis (The Voyage of St Brendan the Abbot) which dates back to at least 800 AD and tells the story of Brendan’s (circa 489-583), Severin sought to follow in the Irish saint’s steps.

“I recreated the boat of St Brendan and set out to see what would happen, and it was in that way that I discovered for me, the fascination of travel wasn’t just space but being able to go back in time, and . . . that new dimension opened for me on the Atlantic,” he later said.

Severin set about building as close a replica of St Brendan’s boat as possible, sourcing oak and ash from Glennan Brothers in Longford and tanned leather from 25 oxen from a firm called Josiah Crogan in Cornwall. He consulted harnessmaker John O’Connell from Bishopstown in Cork. Eleven metres long and open, St Brendan, built at Crosshaven Boatyard in Co Cork, was made from ash ribs and oak dunnels, lashed together with nearly 3km of leather thongs in 1,600 knots, wrapped with 49 traditionally tanned ox hides and sealed with wool grease to protect against the salt water.

As he surveyed the stitching of the leather hides on to the boat at Crossshaven Boatyard, Severin told RTÉ News: “I think the boat is as safe as the people sailing her – the question is ‘Can we sail her well enough?’ And that is the one of the really great questions – in the few months available to us for our trials, can we learn some of the lost arts of handling this type of boat?

“I wouldn’t be doing it unless I was confident that we could manage to do it – we will need weather luck and we do need favourable winds and we could do without any storms.”

On May 17th, 1976, Severin and his three fellow crew men, led by sailing master George Moloney from Dublin, rowed out of Brandon Creek on the Dingle Peninsula, the spot where St Brendan is reported to have departed almost 1,500 years earlier to begin what would prove a 7,200km epic journey.

Severin later explained in a documentary film he made about the voyage: “It was the first of my major projects, and it was to test whether the story of St Brendan, which was hugely well-known during the later Middle Ages, could have been true.

“The story was called the Navigation . . . about the voyage of St Brendan, who sets out with a party of monks in a boat made of leather, and has various adventures on the way, stops at various islands, and reaches a great land far in the West. Some people of course have said he reached North America.

“When I say that it was very well known, it was well known to the extent that Columbus, when he was half way across, actually stopped his little flotilla of three vessels and said, ‘This is about the area where we should find the islands which St Brendan visited.’ Columbus believed in the story and the islands were marked on the map.”

Severin and his crew sailed to the Aran Islands and from there to Iona, the Hebrides, the Faroe Islands (where they picked up artist, Trondur Patersson), before sailing on to Iceland and Greenland and from Greenland to Newfoundland.

He believed his recreation of the voyage helped to identify the bases for many of the legendary elements of the St Brendan story: the Island of Sheep, the Paradise of Birds, Crystal Towers, mountains that hurled rocks at voyagers, and the Promised Land.

On June 26th, 1977, some 13 months after leaving Brandon Creek, Severin and his crew sailed into Musgrave Harbour on Peckford Island in Newfoundland and were welcomed as heroes by the locals who fully appreciated the navigational feat.

But crew member Arthur Mangan from Howth related just how dangerous the voyage was aboard the open boat when he spoke to RTÉ News the day after they landed safely at Musgrove Harbour following the final stage of the voyage – a 52 day trip from Greenland.

“We had some pretty hairy times out there . . . off the east of Greenland, we had a storm of Force 11 or 12 with 40ft waves folding in on us in the boot – at one stage I was up to my knees in water – the boat was half full of water and we just had to get that water out as fast as possible.”

Severin published the story of his remarkable adventure in The Brendan Voyage, a book which became an international best seller that was translated into 16 languages. He also made a documentary film about the voyage.

“It was a project which completely changed my life . . . Because of Brendan, I was able to do a number of other projects of similar kind, mainly investigating legendary voyages by building a ship of the time and sailing,” he told the Irish Examiner in 2017.

Severin undertook voyages to retrace the journey of Sinbad the Sailor from The One Thousand and One Nights in 1980 and 1981, and the voyages of legendary figures from Greek mythology such as Jason and the Argonauts in 1984 and Ulysses in 1985.

He followed the knights of the First Crusade by riding on horseback to Jerusalem in 1987 and 1988. He rode with Mongol horsemen in 1990 to mark the 800th anniversary of the birth of Genghis Khan. That story was published in 1993 as The Search for Genghis Khan.

A prolific author, Severin also wrote a series of historical novels, The Vikings Series about a young Viking adventurer, Thorgils Leiffson who leaves the frozen shores of Greenland and sails as far as Byzantium .

In addition, Severin wrote a series of novels about fictional 17th-century pirate, Hector Lynch, before turning his hand to a series of historical novels set in Anglo-Saxon England. He returned to Hector Lynch in his most recent work of fiction, Freebooter, which was published in 2017.

Severin, who died at his home in Timoleague in west Cork, is survived by his wife, Dee and daughter, Ida as well as his son-in-law James Ashworth and grandsons, George and Guy.