Tanya Sweeney: In Ireland, we have a funny relationship with the idea of house cleaners 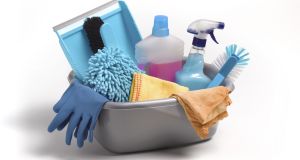 Nowadays, there are an estimated 67 million domestic workers worldwide

Just as it does every year, January’s made-up holiday Nollaig na mBán (well, did you get a day off?) throws a spotlight on women’s emancipation from work, or lack thereof. It’s perfectly fine to talk about “emotional labour” and the gender split among housework with a clean feminist conscience. But let’s be honest: the outsourcing of this domestic labour is a conversation we don’t necessarily like to have.

Turns out that many of my friends – in non-lockdown times, at least – have hired cleaners. They’re just not talking about it. The one pal of mine who doesn’t mind talking about paying a cleaner is a lone father. Yet a covert bush telegraph among my friends swaps out the names and phone numbers of women (and they are always women) who are good at getting to the jobs that they never get around to. Or don’t want to.

You have to wonder why exactly it might be that some women aren’t more open about this. Do some of us think of paying someone to clean up after ourselves is an embarrassing extravagance? Are we worried that others think of it as the last word in entitled, middle-class privilege? Or worse, do we worry that it speaks to a personal failing when it comes to keeping on top of the running of our own homes?

I’m not sure this happens when we look to hire someone to clean our gutters, or mow our lawns. Come to think of it, we outsource plenty of tasks and services to other people. I pay an accountant. Others have a dog walker. Why does hiring a house cleaner seem so loaded with meaning and politics? Why does the stigma about outsourcing this one part of life still endure? Is it because there’s something innately intimate, or private, about the inside of our homes?

Three hours and a couple of hundred euro later, the house gleamed. It was a good feeling; one well worth paying for

In Ireland, we have a funny relationship with the idea of house cleaners. There’s also an enduring way of thinking: if you make the mess, you clean it. If we don’t enjoy it, there’s a very good chance that the person you are paying doesn’t either. Besides, mums always did the housework, didn’t they? Jokes and cliches abound over the efficiency and sheer selflessness of the Irish Mammy as a domestic worker. And while plenty has changed in the dynamic between men and women, this one trope still seems to have stuck. Irish mothers were so good at housework that they didn’t bat an eyelid when a grown-up son or daughter arrived home with a sports bag full of dirty clothes from their own homes. The task was done with love, and without complaint.

Not in my house, though. When I was a teenager, a woman arrived to our modest, semi-detached house once a fortnight. There were five healthy, able-bodied adults and teenagers living there by that point; any one of us could have cleaned out a cupboard, sorted the fridge or hoovered under the beds with relatively little fuss. But we didn’t. My mother, working full-time, certainly wasn’t in the mood to, and so she paid someone else to do it, as was entirely her right. (She wasn’t a complete outlier – she would always give the place “a quick tidy” before the cleaner arrived).

Still, even back in the 1990s, I felt a weird niggle of… well, something approaching unease, as this lady, Breda, made our house presentable. I didn’t know of any other family on our road who had a cleaner back then. Breda and I became pally in time; if I was home from school, her “shift” would start with the two of us amiably sharing a coffee and cigarette and gossiping about our lives. It never felt like a dynamic with any kind of hierarchy in it.

More recently, I moved out of a house and into another, and hired cleaners to leave the old house spotless for the new owners. I let a team of cleaners into the house, feeling only slightly guilty as they walked past me with carpet shampoos and brushes. Three hours and a couple of hundred euro later, the house gleamed. It was a good feeling; one well worth paying for.

Nowadays, there are an estimated 67 million domestic workers worldwide.

While there are no current figures for Ireland, it’s thought that one in three people in the UK – in a trend, led by the under-35s – contract a house cleaner. They do so for many reasons: they work long hours and would rather spend their non-working hours doing something else. They have learned the value of time. In today’s world – and again, in non-lockdown times – something has to give. We work long hours and juggle plenty: childcare, life admin, extended family a social life. Others want to avoid arguments in the house about housework (one statistic notes that 47 per cent of Irish couples argue over housework. Frankly, I’m astounded it isn’t higher).

Once we are willing to compensate another person fairly for this, there should be no guilt involved. And really, we don’t even need to offer up an excuse for outsourcing housework.

Some people simply don’t like washing window frames, even if they are their own. And that, really, is fine.