We wanted to embrace the grieving family but we couldn’t

Hilary Fannin: Mourners stood apart to celebrate a man who believed in solidarity 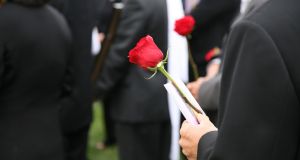 We wanted to offer the grieving family condolences with handshakes and hugs, but we obeyed the rules. Photograph: iStock

He died on the afternoon of Friday the 13th, after a long illness, in an intensive care bed of a Dublin hospital that was bracing itself for a pandemic. Outside, under a rain-heavy March sky, the city too was preparing itself for a new reality, supermarket car parks filling and refilling, mobiles ringing, plans for escape and repatriation being made and unmade.

My friend telephoned. “I wanted you to know,” she said, “that he has gone.”

I remembered meeting him as a young man, shortly after he and my friend married. He was tall, bony, handsome, a little austere. I knew him to be a person of principle, and I couldn’t, at the time, have said the same about myself.

Years rolled by, as years have a habit of doing, and when we met again he was nearing retirement. He was still imposing looking, but he appeared to me to be more gregarious, generous with his knowledge of books and music and politics.

He and my friend had had two children, a boy and a girl, intelligent, beautiful young people who were, when I got to know them, on the cusp of their adult lives.

The first inkling that he was ill came when he and my friend were climbing the stairway to a borrowed apartment in an Italian city where they had gone, as a retirement treat, to listen to opera. He had become short of breath, unable for the ascent.

His was a long illness, stoically borne, and sometimes people say those words and the familiarity of the phrase diminishes it to the point that it becomes meaningless. But the truth is that he did bear his last months and weeks with stoicism, holding on to every moment with his family with the same determination and sense of purpose that had defined his life.

When my friend telephoned me on that cold afternoon to say that he had died, the cataclysmic events all around us, the torrent of unpredictability flooding our world, seemed to shrink under the particularity of her words. The reality of her family’s loss spoke of the reality of other losses, those that have been, those to come.

We gathered cautiously for the humanist service to celebrate his life. As we stood apart from one another, the March wind taunting, I looked at the faces of the people who had come to bid him farewell, faces stilled by sadness, burdened by the times. We wanted to embrace, we wanted to offer the grieving family condolences with handshakes and hugs, we wanted to touch the cheek of a desolate daughter and say I’m sorry, I’m so sorry for your loss.

We obeyed the rules, however, and without that salve of affection, without being able to physicalise our sympathies, what really mattered were the words. And the words that my friend and both her children and the members of their extended family spoke were powerful and dignified and told of a man who all his life had recognised heroism in the unsung.

We left the chapel, not to repair to a hotel or bar, but to carry away, in the silence and dignity with which it had been received, the powerful testimony of a life well lived

When my friend spoke, she began and ended by thanking the unsung heroes in their lives. She thanked the cleaners in the wards where he had spent his last months, for their warmth, their energy, their conversations with him about the politics of their homelands; for their camaraderie, for managing to smile every day of their six-day working week.

She thanked the doctors who had fought to save her husband, and the nurses whose expertise and humanity had accompanied the family throughout. “We are,” she said, referring to the current crisis, “in good hands.”

Looking into the silent congregation, she thanked the donor who, a number of years ago, had gifted her husband a lung; an anonymous hero who had extended his life, allowing him to see his beloved children graduate.

We left the chapel as we had arrived, in a broken trajectory, not to repair to a hotel or bar, but to carry away, in the silence and dignity with which it had been received, the powerful testimony of a life well lived.