I can’t ever remember the city being so still, so quiet . . .

Hilary Fannin: Grafton Street was deserted. I went into the bookshop. One other customer 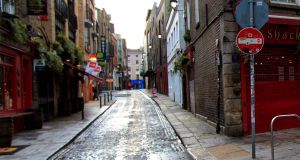 Dublin at a standstill: ‘so quiet, the air heavy with a sense of anticipation.’

Grafton Street was deserted. I went into the bookshop, where the only customer was a smiling woman who was buying a book for her father. Her father wore a haversack; he looked like a man preparing for a journey.

In the shoe shop further down the road, I stood like an uninvited guest among the spring styles. Three assistants were crowded around the desk, reading the news from their mobile phones.

“Do you want help with the shoes?” one asked, a tad sceptically.

On the street, it was raining, mean and sharp. Two dazed tourists stood outside one of the city’s more gracious emporiums, looking at a map. I smiled at them; they moved on.

I had come into town for an appointment that had been cancelled at the last minute. I can’t ever remember the city being so still, so quiet, the air heavy with a sense of anticipation.

I went into the opulent shop and walked through the perfumed halls, then ascended on the escalator to the top floor, where I saw cornucopias of dizzyingly expensive designer clothes and trinkets that glittered like tears.

There was a coat draped over a faceless mannequin, priced at a little less than €3,000. I read the label; the garment was fashioned from cashmere and camel. I have no idea where, or indeed how, the camel element came in. Maybe the reason the coat cost more than the monthly starting salary of a midwife was that it had been lovingly transported across the Gobi Desert on the back of a flatulent dromedary.

I would have asked the shop assistant to elucidate, but she was deep in conversation with a customer. I decided against interrupting their discussion, the shop assistant being one of those fragile, impeccably well-groomed middle-aged women who inhabit their bodies in a kind of powdery, anxious way that makes me feel gauche and clumsy.

The woman she was talking to had sunglasses on top of her head and was doing a lot of sotto-voce declaiming and jerky gesticulations with her car keys.

Invisible in my unremarkable attire, I wandered around. There was a rack of jeans, the prices reduced from half a million quid and the blood of your firstborn to something vaguely affordable. There was a pair in my size, so I made my way into a changing room.

The vestibule was furnished with a frilly chair, and there was also a pair of nude high heels in the corner that you could slip into when trying on an outfit. Hanging on a hook over the mirror were a flimsy scarf to protect the upscale stock from the customers’ make-up and a kind of shower cap to put over one’s well-coiffed hair.

I tried on the jeans and then, because they were there, I slipped on the high-heeled shoes. They were too big for me and clearly not intended to be worn with last season’s casuals. Clomping around the fragrant space, I felt like I used to when I was a little girl, playing dressy-up in my mother’s bedroom. (One of the pluses of having a mother with a dormant stage career was the cardboard suitcase of spindly slingbacks and balding hairpieces that lived in the bottom of her wardrobe.)

I was thinking about putting on the hairnet and making faces in the mirror when I found myself distracted by the conversation taking place beyond my curtained lair between the nervily aloof assistant and the gesticulating woman.

“I said to Donal, ‘If that lot get in, we’re leaving and we’re taking our money with us’.”

“He didn’t need to say anything. He knows I’m right. You get plenty of bang for your buck in Barbados.”

“I suppose. Are you taking the oversized Wang?”

“I’ll think about it. If I come home with another cardigan, he’ll divorce me.”

I didn’t buy the jeans. They had rows of glittering studs on the pockets and they were uncomfortably tight, redolent perhaps of something that Dolly Parton might wear to picnic in the Smoky Mountains or Tammy Wynette might have tearily slipped into to stand by her man. I looked at myself in the mirror and saw none of the glamour of those resilient women: just me, a middle-aged woman who might just have mislaid a herd of Holstein Friesians.

Mutton dressed as lamb, as my Granny Maddie would have said, too long in the tooth and soft in the backside to take the blanket from the bedroom, vacate my Tennessee mountain home or jump off the Tallahatchie Bridge in those particular threads.