‘I come from an explicit, brash, rude culture. Ireland is a lot more implicit’

New to the Parish: Melanie Labor arrived from Germany in 2006 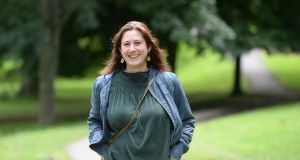 The first time Melanie Labor visited Ireland in the late 1990s she bought a travel guide which she regularly leafed through during the fortnight she spent backpacking around the country. Only 16 years old, the German teenager found Irish people friendly and welcoming despite her limited English.

Two decades on, and having spent 14 years living on this island, Labor reflects on how little her battered guide book – filled with Irish stereotypes of romance, mysticism and green rolling hills – actually taught her about the real Ireland.

“What you never read about in travel guides is the other Ireland that is embedded within the EU and has become a destination for migrants. There are so many different facets to Ireland as a country and Irish society.”

Fluency only started for me when I became more immersed in Irish life. It’s when you start to recognise cultural traditions like when someone offers you a cup of tea and you decline at first. I call it the Irish tea dance

Labor had recently finished school and was working in a coffee shop in her hometown of Engen in southern Germany when she decided to spend a summer in Ireland to improve her English. With fond memories of her teenage trip to this country, she packed her bags and flew to Galway on what was supposed to be a three-month trip.

“Because it was 2006 and the tail end of the Celtic Tiger it was really easy to find a job and I ended up working in Martine’s wine bar. People were very open-hearted and I fell in love with the easygoingness.”

Compared to her hometown, Labor found Galway “colourful and multi-cultural” and decided to extend her trip to spend a year in Ireland. “I didn’t meet many Germans that year so I was forced to speak English and get used to the accent. I think fluency only started for me when I became more immersed in Irish life. It’s when you start to recognise cultural traditions like when someone offers you a cup of tea and you decline at first. I call it the Irish tea dance.

“One of the biggest differences and challenges was I come from a very explicit culture which is quite brash and potentially rude. I had to get used to reading between the lines, Irish culture is a lot more implicit. ‘I’ll see you soon’ doesn’t necessarily mean I’ll actually see you soon.”

While she enjoyed living in the west of Ireland, making lasting connections with people was not always easy. “Even though Galway is very vibrant, people transition through it so it was difficult to make long-term friends or actually find people.

Labor eventually decided to stay and study psychology sociology and political science at the National University of Ireland, Galway. She recalls one sociology lecturer, who happened to be German, asking his students to define what it meant to be Irish. “It was one of the first times I thought about identifying and belonging in a theoretical sense. I was starting to see that my definition of being Irish was based on a lot of stereotypes.

I’ve always been treated well by Irish society, but I learned there was another Ireland that existed, and it was no different from any other European country

After completing her undergraduate degree, Labor moved to Dublin to study for a master’s at Trinity College in race, ethnicity and conflict and subsequently found a job as a research assistant with the Immigrant Council of Ireland. It was in this position, providing support to callers through the integration office, that she discovered a different, darker side to the country she’d grown to love.

“I was collecting reports from people who would call to talk about the racism they’d experienced. I remember one eastern European family who had been on holiday and came home to discover their apartment had been vandalised with swastikas on the walls.

“I’ve always been treated well by Irish society but I learned there was another Ireland that existed and it was no different from any other European country. As a white European I’ve never really experienced any racism or xenophobia. It makes me sad that people make judgments on somebody else’s appearance and that perceived sense of unIrishness.”

While racism is a problem in Ireland, Labor says the lack of prominent right-wing political groups in this country is encouraging. “We don’t have any right-wing parties here of the same scale, calibre and influence as the AfD (Alternative for Germany). I’m aware of the Freedom Party and the National Party but luckily they’re not in the Dáil and don’t seem to be getting much support.”

Labor feels “heartened” by the changes she has witnessed in Irish society since she moved here 14 years ago. “When I think back to 2006 there was no marriage equality and no abortion rights. I went on a pro-choice march in 2014 and remember chatting to a friend about whether change would actually happen. Then all of a sudden there was an overwhelming majority in support of equality. Ireland changed so quickly, it just seemed like an acceleration from around 2013.”

However, this change has yet to extend across the whole country, she adds. “When I think about how much Ireland has changed it’s important to make the distinction between Ireland and Dublin. I’m not sure if Ireland has become any more open since 2006.”

I’d consider the education I’ve received in Ireland as quite formative. I think I’ve become more aware in a political and social sense

Working as an ethnographer researching disadvantaged youth communities in Dublin has also opened Labor’s eyes to issues around poverty and homelessness. “I found there were young people, regardless of their ethnicity, who were much more disadvantaged than others and met men who didn’t have much of a future.”

Labor, who is now doing a post-doc at Maynooth University, still feels a strong connection to southern Germany but admits to often “feeling like a tourist” when she visits family. “I think it would be a big step to move back to Germany. It’s of course dependent on my job and where my boyfriend wants to be but I’d like to be able to stay here.

“I’m really fond of Ireland which I consider my home. Sometimes I think about what it would be like to return to Germany but I cannot really picture it.”

Labor feels she’s become more “resilient” during her time here and is proud that her 23-year-old self had the courage to move abroad. “I’d consider the education I’ve received in Ireland as quite formative. I think I’ve become more aware in a political and social sense.”