Unionist politician who was one of North’s first PR men 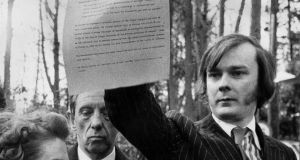 Lord Laird of Artigarvan, who has died after a period of ill-health, preferred to be known in Ulster Scots as “Laird Laird”. He was a larger than life independent peer in the House of Lords, an advocate for Ulster Scots and the first chair of tha Boord o’ Ulstèr-Scotch (the cross-Border Ulster Scots language body)

Laird was also a strong unionist and Orangeman, an advocate for railway transport, being part of pro-rail campaign group “Into the West”, and a public relations pioneer in the North.

He always saw himself as descended from “New Light” Presbyterianism, the church’s theologically liberal wing.

He was also a link to the upheavals in the North of the early 1970s. In 1970 he was the youngest MP in the old Stormont parliament when elected to succeed his father as Ulster Unionist MP for the St Anne’s constituency. An opponent of prime minister Terence O’Neill, he was expelled from the parliamentary party in January 1972 after voting for a DUP motion criticising the banning of certain Twelfth parades. He topped the poll in West Belfast in the 1973 Assembly election on an Ulster Unionist Party-West Belfast Loyalist coalition ticket. Like many unionist contemporaries, he subsequently shifted to support of power sharing with nationalists.

Withdrawing from active politics in the mid-1970s, he established one of the North’s first public relations companies. Thanks to his flamboyance, it flourished.

John Dunn Laird was born in Belfast in April 1944, the younger of two sons born to Norman Laird, a GP, and his wife Margaret (née Dunn), a nurse. His father was from Belfast and his mother from Artigarvan in Co Tyrone, a place that was always a special to him. Home was a political house, with his father becoming an Ulster Unionist Party MP, and his mother being a city councillor.

He was educated at Inchmarlo Preparatory School, then the Royal Belfast Academical Institution. Unfortunately, undiagnosed dyslexia blighted his school years.

After school, he joined the Trustee Savings Bank, becoming an inspector and he was skilled in the use of computers in their early days.

Later, he saw chairmanship of tha Boord o’ Ulstèr-Scotch as a working commission. He was highly successful, winning recognition from the EU of Ulster Scots as a minority language. He lent his PR skills to charity and was committed to dyslexia charities and to helping police widows.

He was above all gregarious. He frequently invited those he met in Belfast to tour London’s Palace of Westminster and see the Houses of Lords and Commons.

As a peer he had the right to design his coat of arms. His motto was Forrits wi jonick (forward with justice). “Given my background as a Presbyterian, holding on to my people’s need for freedom, my own problems with dyslexia and bullying at school and my natural dislike of authority, the motto reminds me always to fight for the underdog,” he explained.

His last years were blighted after he was caught offering firms and foreign states improper parliamentary access for cash. The scandal ended his membership of the UUP. However, he was not charged with any criminal offence.

He is survived by his wife Carol, daughter Alison, son David and brother James.