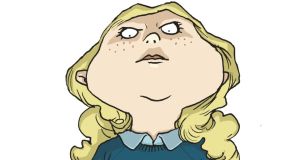 “You better not cry,” Honor goes.

Yeah, no, this is when we’re about 20 miles outside of Tralee. And I’m there, “I’m hordly likely to cry, Honor.”

She goes, “Er, you cried once when Elaine Crowley was on holidays and someone else was presenting Midday.”

“You’re always bringing that up as an example. If you cast your mind back, it was around the time that Ian Madigan announced he was going to Bordeaux and it felt like everything was suddenly changing.”

“You’re not Elaine!” she goes, doing a pretty passable impression of me when I had my sort of mini-breakdown. “I want Elaine! Elaine’s the only reason I get up in the afternoon! Where is she, Honor? What have they done with Elaine?”

“In my defence, I was drinking like a rock stor around that time.”

“Whatever. I’m just saying that you better not cry and make a focking show of me in front of all the other kids.”

She’s going to Irish college, by the way. Three weeks on the Dingle Peninsula, although no one – myself included – expects her to last the full course. As a matter of fact, I doubt if she’ll last the weekend. Which is why, unbeknownst to her, I’ve decided to check into the Europe Hotel and Resort in Killorney for a few days, just to save me the job of having to drive back down again when she inevitably rings me and tells me to come and get her.

Thank fock it’s not an exchange programme. I genuinely wouldn’t know what to say to a child from Tralee

“Are you worried about being possibly homesick?” I go.

She’s like, “Er, no? I’ve been away before, remember? As in, the time I went to Beijing on that exchange programme?”

I get a sudden, traumatic flashback of little Pang.

She’s like, “No, it’s not an exchange programme this time.”

“Thank fock for that. I genuinely wouldn’t know what to say to a child from Tralee.”

Eventually, we arrive at the drop-off point. We both get out of the cor and I carry Honor’s seven pieces of Louis Vuitton luggage to the coach.

Then I go, “So this is it, Honor!” expecting – I don’t know – some show of emotion, except she just goes, “I told you to carry my Pégase, not drag it. Now there’s dirt on the focking wheels!”

Then she climbs onto the coach. As it pulls away, I wave goodbye to her, except she doesn’t wave back. She just points her finger and mouths the words, “I want a new focking case!” at me.

Anyway, to cut a long story short, an hour later, I’ve checked into a suite in the Europe Hotel and Spa. I’m lying on the bed in my bathrobe and I’m watching – as fate would have it – Elaine on TV3. And that’s when Sorcha decides to ring.

“You didn’t let the wheels of her good case touch the ground, did you?”

“I did, unfortunately. It doesn’t matter. I’ll buy her a new one.”

“Yeah, no, I’ve just checked into the Europe Hotel and Spa.”

“It’s just for a few nights. Look, you know what Honor is like. She’ll probably be thrown out in a day or two. I don’t want to have to drive all the way down here again to collect her.”

“Can I just remind you, Ross, that you have responsibilities here?”

“You have three other children.”

“Did you just describe your actual sons as rubbish?”

“What I mean is, let’s be honest here, they’re morons. They take after me. All they do is swear and break things. At least with Honor . . .”

I hear my voice suddenly crack.

“Oh my God,” Sorcha goes, “is that Elaine Crowley I can hear in the background?”

I’m there, “There’s nothing to worry about. I just find her voice very reassuring. She’s like . . . like a friend.”

And that’s when the floodgates finally open.

“Breathe,” Sorcha goes. “Just try to breathe. Ross, listen to me. I know this is hord for you, but you’re going to have to accept that Honor is growing up.”

I’m there, “Why can’t things just stay the same, Sorcha?”

“Because that’s not how the world works. We had this conversation when your friend went to France – do you remember?”

“He was actually a protégé and a friend?”

“It seems like only about two years ago that I held her for the first time in the hospital. It won’t be long before she’ll be pretending to go to a friend’s house to study, then coming home reeking of vodka.”

“That’s life, Ross. It’s part of growing up. And she is growing up, whether we like it or not.”

“I hope she’s a complete wagon to everyone and they send her home.”

“Ross, she’s going to be gone for three weeks. I know there’s no point in me telling you that the time will fly because it probably won’t. But you need to come home now.”

“I’ve got a facial booked.”

“It’s a Biophora Deep Cleansing one. Actually, it doesn’t matter. I’ll cancel it.”

Ten minutes later, I’m checking out. The girl on the desk asks me if I had anything from the minibor and, in a fit on honesty that’s very much out of character for me, I tell her I had the macadamias.

And it’s while I’m waiting to find out whether they cost five yoyos or five hundred that I suddenly get a text message. It’s from Honor. It’s just like, “Thank you for driving me to Kerry.”

I’m about to reply with an “x” when her second text arrives. It’s just like, “Don’t send something sappy back. This isn’t us having a moment. I’m just saying thank you.”

And I look at the “x” and I just think, what the hell, and I end up sending it anyway.