Mary Robinson and Maeve Higgins: ‘It’s important to not think it’s hopeless, because it’s not’ 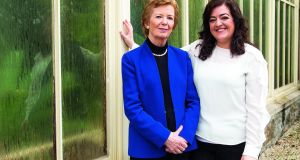 Mary Robinson and Maeve Higgins in Dublin. Higgins says she wasn’t thinking about climate change on a day-to day-basis until she began working with Robinson. Photograph: Ruth Medjber

Some partnerships make instant sense when you hear of them, no matter how unlikely they initially appear. For a new climate change podcast – Mothers Of Invention – comedian, author, actor, and New York Times columnist Maeve Higgins buddies up with former Irish president and former United Nations high commissioner for human rights Mary Robinson.

The podcast is offering a feminist solution to the manmade problem of climate change, interviewing women working in the area and tracking stories of innovations, activism and solutions women are offering internationally to tackle the great threat to the planet. These include Tara Houska, a native rights attorney from the Couchiching First Nation; May Boeve, the cofounder of 350.org; Tessa Khan, the Australian-Bangladeshi climate litigator; and Dr Yvette Abrahams, a South African women’s rights advocate. The producers are Doc Society, formerly BritDoc, a non-profit that supports the production of documentaries.

At a cafe in Drumcondra, Robinson and Higgins detail the podcast’s genesis. When Robinson contacted Jess Search, Doc Society’s chief executive, and Beadie Finzi, its foundation director, looking to make a documentary about climate change, they pointed her towards the 2017 Julia Dahr film Thank You for the Rain they had helped with, about a Kenyan farmer. (“He happened to be a male farmer,” Robinson says. “It wasn’t his fault,” Higgins adds.)

Instead, Search and Finzi suggested a podcast. Robinson was unfamiliar with the form. “I said, being a novice, ‘what’s a podcast?’ This was about a year ago.” Search and Finzi said to leave it with them, and Robinson presumed the conversation was over, but BritDoc returned with the idea for Mothers of Invention. Two possible presenters were pitched, one of them being Higgins. Robinson was skeptical of a comedian as a co-host, and then she met Higgins. “You came along, you were outside the restaurant where we were, do you remember?” Higgins tries to halt the anecdote – “we don’t need to get into that!” – where according to Robinson, Higgins was “wandering around outside” after first getting lost on her way to the meeting in London, and then being unable to locate the door. After a trial recording, the Doc Society team knew they were on to a winner.

Higgins was already a podcast pro, as a co-host on Neil deGrasse Tyson’s StarTalk, and creator of Maeve In America, a collaboration with comedy producers Pretty Good Friends and Topic (Missing Richard Simmons). The podcast was an excellent and touching series about the human stories behind immigration, just as immigrants were being demonised by Trump.

She was eight years old when I was president,” Robinson says of Higgins

Mothers Of Invention’s episodes are themed, with Robinson playing the expert to Higgins’ smart comic relief, as they examine issues of climate change in the context of food, plastic, health, litigation, divestment and energy.

Although Robinson was the newbie to podcasts, she took enjoyment from Higgins’ propensity to occasionally needing a few takes while recording. “But Mary can hit it first time because she’s had years of training,” Higgins protests. “I’m just so much younger. Just so, so, so much younger.” Robinson is fine with the ribbing, “She was eight years old when I was president,” she says of Higgins. “I’m clinging on to that fact,” Higgins says.

I think it’s important to not think it’s hopeless, because it’s literally not

Of the topic itself, Higgins says that while she understood a lot of the science behind climate change, she wasn’t thinking about it on a day-to day-basis until she started working with Robinson. “Because it is so huge and it is so frightening, it’s easy to put your head in the sand,” she says. “I think that by finding out who is taking action and who is working and what are the hopeful things, that just helps me to think about it, and helps me understand it more, and helps me to engage.

“I think it’s important to not think it’s hopeless, because it’s literally not. There’s loads of really interesting, amazing things, and it’s an opportunity to change the way we live. The intersections are interesting: Mary’s background is walking the corridors of power and being on the inside of the Paris Agreement. And yesterday, Mary was on the phone with a Black Lives Matter activist who was protesting outside. They had a brilliant discussion and had loads in common. I think coming together is really important.”

The banter between Higgins and Robinson is made for radio (or podcasts). “Let it be shown that she physically attacked me,” Higgins says at one point, when Robinson nudges her gently. Does Robinson think Higgins would make a good president? “When she grows up,” Robinson deadpans. “I love Mary’s work ethic,” Higgins says, citing how quickly the series has been recorded. “Working really hard when you care about something instead of being paralysed, instead of saying, ‘I wish I could do something about that.’ Mary does it. So that’s a cool facet of her personality.”

The former president’s enduring style has also impressed Higgins. “When I met Mary, I said, ‘you look exactly the same as you looked when I was younger!’ What is happening? I don’t think it’s cosmetic surgery.” Robinson’s alarm at the joke quickly turns to laughter.

Working with an icon might spark nerves in some. “I wasn’t intimidated,” Higgins says, “because Mary is really kind and isn’t at all formidable. This is something Mary has been working on for 15 years – climate justice is her whole foundation. I was aware I was coming to it as a beginner, so I was keen to do a good job and to do it right.”

Of course, the subject is a very serious one, although Mothers of Invention seeks to examine the issue from the perspective of solutions, in order to help listeners engage with climate change in a positive manner, with the goal for them to be motivated to effect change in their own lives and in their communities. We meet on World Refugee Day; that week, the distressing scenes at the US-Mexico border are at their height, with children and infants being separated from their parents.

“I’ve always had this sense of justice. I joke it’s because I grew up between four brothers, having a sense of human rights and gender. I really dislike injustice. I’m so angry about what’s happening on the southern border of the United States at the moment,” Robinson says.

She often thinks about what the world will be like for her six grandchildren (three boys and three girls) in 2050. “The world [population] will be over nine billion, maybe as much as 10 billion, somewhere between that. We’ve never seen growth like that. We’re seeing more water scarcity, more food insecurity, more people have to leave because of flooding or drought – they can no longer live where they were. Small islands may go under; parts of Bangladesh – 20 million people – may have to move. Where will they go? I have this constant converastion with myself that gets me out of bed in the morning. How do we get that sense of urgency that we need? And yet I don’t think that’s the message we want to get across on Mothers of Invention, because that’s too gloomy. But that is what bothers me.

“But I think we need the belief that we can get a better world. I believe it.”

Mothers Of Invention is available on iTunes, Play, Spotify, Stitcher or wherever you get your podcasts. The first episode, Litigation, is out now. The next episode, Plastics, is out on Monday, August 6th, mothersofinvention.online