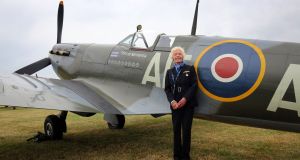 Mary Ellis with a Spitfire at Biggin Airfield in Kent in 2015. The Second World War pilot has died at the age of 101. Photograph: Gareth Fuller/PA Wire

In 1946, a book telling the story of the British Air Transport Auxiliary (ATA) during the second World War was published. The penultimate entry in the roll-call of fliers on page 222 of Brief Glory lists among the many male entries, “First Officer Wilkins, Mary, Miss”.

In 1961, First Officer Wilkins would become Mary Ellis, but, with the passing of more than 70 years, the fame of Ellis, who has died aged 101, and other women of the ATA, rather than proving transient, has grown immeasurably.

Wartime publicity campaigns did feature “Attagirls” doing their bit in the skies above Britain, and Ellis certainly fitted the bill. “I am passionate for anything fast and furious,” she wrote in A Spitfire Girl, with Melody Foreman (2016). “I always have been since the age of three and I always knew I would fly. The day I stepped into a Spitfire was a complete joy and it was the most natural thing in the world for me.”

During her war service Ellis flew an estimated 76 types of aircraft, including 400 different Spitfires – among them every marque produced between 1941 and 1945 – and it remained her favourite aircraft. But that fighter was just one plane among many; there were North American Mustang fighters and twin-engined Baltimore bombers and, once, having landed a Wellington bomber in East Anglia, she found the unbelieving ground crew searching the plane to find the man who had really flown it.

The operations out of White Waltham in Berkshire took her around the country in hazardous conditions, which could mean long train journeys back across an extremely cold, grey, blitzed Britain.

It was on January 1st, 1940 that the first eight female pilots had been recruited into the ATA, by Pauline Gower, the daughter of a Conservative MP. But old attitudes did not go away. In that year, too, the editor of the Aeroplane, CG Gray, wrote an infamous editorial: “The menace is the woman who thinks she ought to be flying a high-speed bomber when she really has not the intelligence to scrub the floor of a hospital properly.”

The theory was that women would be confined to flying Tiger Moth biplanes from the De Havilland factory in Hatfield, Hertfordshire, to other airfields. The reality was different. By the end of the war, 166 women from many countries had served. They comprised more than 12 per cent of the total pilots in the ATA, and some 15 had been killed. And ATA pilots could not use communication equipment, as the airwaves were kept clear for the Royal Air Force.

Ellis decided to enlist in 1941, aged 24, after hearing an announcement calling for women pilots on the radio. She applied and was sent to Hatfield, where she demonstrated her prowess in a Tiger Moth. She trained further on Moth, Hart and Hind biplanes at the RAF’s Central Flying School in Wiltshire.

By 1943 a campaign led by the Conservative MP Irene Ward won equal pay for women of the ATA such as Ellis. It was one of the earliest successes in a many-fronted, continuing battle. “When women pilots cease to become news, the battle of equality will have been won,” Ellis wrote in 2016.

The men of the ATA had been jokingly called “ancient and tattered airmen”, and the women tended to be from varied but affluent backgrounds. Ellis was born into a farming family in Leafield, Oxfordshire, the daughter of Nellie and Charles Wilkins, and was educated at Burford high school. In the interwar period Sir Alan Cobham’s flying circus was wildly popular in Britain and, after a visit to the show at nearby Witney Aerodrome, in 1925, when she was just eight years old, her father bought his daughter a flight on a De Havilland Moth biplane.

This ignited her interest in flying and in her teens – with a lack of enthusiasm for school hockey – her teachers permitted her to begin lessons at Witney. The upshot was that, by the time war was declared in September 1939, the young woman was already a qualified flier, albeit one without an apparent outlet for her talents.

After the war, she remained a registered pilot, ferrying planes for the RAF for six months. She continued farming, and was a personal pilot to a family friend who had farms on the Isle of Wight. When he bought the airfield at Sandown on the island, he made Ellis the managing director. She met Donald Ellis, also a pilot, at Sandown, and they married in 1961. He died in 2009.

She enjoyed car rallying, and continued to drive, safely, past 100 years. This year, she was awarded the freedom of the Isle of Wight.

Two €10 wines to try: a vibrant Sauvignon Blanc and a fruity Bordeaux
10

Keto diet: What is it and does it actually work?
Real news has value SUBSCRIBE