When it became obvious his wife Maureen would need nursing home care, he decided they would move into one together 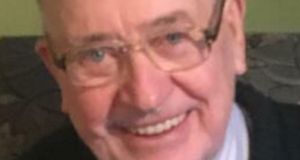 Thomas Meade: He retired in 1988 as registrar general or ard chláraitheoir cúnta

Thomas Meade's devotion to his wife Maureen was such that when it became obvious she would need nursing home care, he decided they would move into one together.

Better known as Tom or Tommy, he had been her main carer in recent years as she suffered from eye disease and dementia, but his own deteriorating health saw him resolve that they would go to a care setting in Loughshinny, near their Rush, Co Dublin, home.

After 63 years of marriage they moved in December 2019, and he joined the choir there in an effort to settle in. Before long they were both participating in activities like bingo and arts and crafts, and he was looking forward to spring, being in the garden and perhaps going to local beaches.

But with the advance of Covid-19 in the community, all visits stopped from about March 11th, and his family, including his five children Caitriona, Maurice, Siobhan, Maria and Madeline, his 15 grandchildren, his great-grand-daughter, nieces and nephews, would never see him again.

He was brought to Beaumont Hospital on April 7th, diagnosed with coronavirus the next day, and, poignantly for a man of great faith and a love of Easter, died on Good Friday.

His children had a brief chat with him – a surreal experience – with the sound of oxygen pumping away in the background, the sadness compounded by the fact that their mother did not know. She was being isolated in the nursing home.

Born in Dublin on October 22nd, 1931, Thomas Meade was the youngest of seven children, with five sisters, one of whom died in childhood, and a brother, Maurice. All his siblings predeceased him.

He grew up beside Croke Park, winning a scholarship to O’Connell’s secondary school. He excelled in the Civil Service exams, and became an official of the Department of Health. There he met Maureen Sheehan, who, at 17, had just moved to Dublin from Macroom, Co Cork.

They both worked in the General Registry Office, but she had to leave the Civil Service when they got married in 1956. He retired in 1988 as registrar general or ard chláraitheoir cúnta. “Dad instilled in us a strong sense of public service and a number of his children followed in his footsteps,” his daughers Maria and Madeline said.

A man of many interests, he loved sports, particularly GAA and the Dubs, as well as horseracing – a love of which he shared with his son Maurice. Throughout his career he worked part time on the “tote” and continued until he was 77.

Family holidays were a priority for a man who loved travel, and his children recall being brought to most counties in Ireland. When finances allowed there were trips to Bermuda and the UK to visit his daughters, cruises with his wife and brother, and in later years overnight stays with his daughters in Meath and west Cork.

His final journey before burial and after a funeral service with his favourite hymn was around the home place at his beloved Rush harbour, where all the neighbours formed a guard of honour to bid him farewell.