Elizabeth Morris obituary: The cornerstone of a family home full of ‘fun, frolics and cooking’

Lives lost to Covid-19: Elizabeth Morris was widowed in 1970 with 12 children 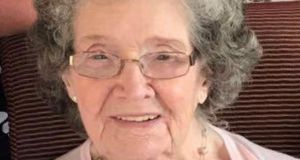 Elizabeth Morris was diagnosed with Covid-19 on April 4th and died on April 8th, aged 90.

Elizabeth Morris was the cornerstone of her family and set the tone for everything in her Cloiginn Road home in Dublin’s Ballyfermot.

Her father, John Duffy, was a medical officer in the Irish Army and her mother, Mary, looked after six children, five boys who all became soldiers, and Elizabeth. Also known as Betty, she was born on October 9th, 1929 in what is now Cathal Brugha barracks.

She worked in a launderette and did invisible mending on expensive shirts, a skill she passed on to her children and some grandchildren.

In 1949 she met postman Tom Morris at a 21st birthday party and they married the following year. They settled in Ballyfermot, where they had seven boys and five girls – Patrick, Maria, Thomas, Caroline, Jacqueline, Imelda, Sean, Noel, Gregory, Richard, Denis and Priscilla. Their eldest child Francis was stillborn.

In the eulogy at her funeral mass, her daughter Jacqueline described their home as a “busy house full of fun, frolics, smells of cooking, rows, and makey-up concerts on the landing”.

But it all changed when their Dad died of a heart attack. Money was tight and Elizabeth worked many jobs to supplement her income. Her final job before retirement was on the general staff at Senior College Ballyfermot.

All her children had chores and her standards were high. “Shoes had to be polished, shirts tucked in, homework complete” and they all had to be up early for mass.

Her son Richard recalls how she made Christmas special. “Christmas Eve you’d go to bed and you wouldn’t know the difference but when you woke up on Christmas morning it was magical. The tree would have been finished, the house decorated, the smell of food we would not normally have. It was the only day the fire was lit in the morning.”

The big thing about Christmas was that there was a gift for each of her 33 grandchildren and 33 great grandchildren.

She was a great cook and baker but in her latter years “she absolutely loved junk food, curries, fish’n’chips, cream cakes and especially a good fry up”, said Jacqueline.

And she had a wicked sense of humour, along with the most infectious laugh.

She loved music, ballet, and was a great reader, well informed about current affairs, gossip on celebs, sports and politics and she loved travels across Europe with family members.

She spent the last 11 months of her life in Marymount Care Centre in Lucan where she especially loved getting breakfast in bed, her knitting class and having a voice at the residents’ meetings.

Elizabeth was diagnosed with Covid-19 on April 4th and died in Holy Week on Spy Wednesday April 8th, aged 90.