Lives lost to Covid-19: ‘What she valued most in people was honesty and them being down to earth’ 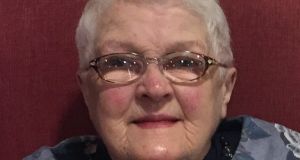 Teresa Kelly left the State at a young age to work as a housekeeper in Newcastle, Northern Ireland, and later Belfast.

“She was genuine, selfless and loving,” says Gabriel Kelly of his late mother, Teresa Kelly. She was born Teresa Smith on October 9th, 1930, in Tullybrick, Co Cavan.

At the age of 16 she went first to Newcastle in Northern Ireland and then Belfast, where she worked as a housekeeper and cook. While in Belfast she met Patrick Kelly, a painter and decorator. They married in 1962, had three children and subsequently three grandchildren.

In 1968 they came back to her home place and settled there. Unusually for that era she inherited the farm, being an only child.

Teresa did not work outside the home after having her children. “Like a typical Irish mother, she made sacrifices for everybody,” says Kelly. She was interested in history, current affairs and politics, with elections and the ensuing counts being a particular joy. However, her family was her central focus. “Everything rotated around her family.”

A highlight of her life, and one of the few times she left the country, was a meeting with Pope John Paul II in Italy in 1989, on the occasion of her son Gabriel being ordained a deacon. Her faith was important to her throughout her life, and she always dressed up for Mass on Sundays, which she never missed. “She led a very simple life,” says her son Gabriel. “What she valued most in people was honesty and them being down to earth.”

Patrick Kelly died in 2013. After a fall in 2017, Teresa moved to Oak View nursing home in Belturbet, Co Cavan. Her children and grandchildren remained the central focus of her life until the end. From March 25th to April 3rd she was at Cavan General Hospital where her son Gabriel, a hospital chaplain, was able to see her daily. “I put her on the phone to each of her family in those last days, which we did not know then were her last.”

On April 3rd, Teresa Kelly was readmitted to Oak View Nursing Home. She died the following day on April 4th before her Covid-19 test came back positive.