‘We cannot get sick here. It will spread.’ Norman lives with 19 others in Phibsborough

New to the Parish: Norman Ayala arrived in Ireland from Honduras in 2020 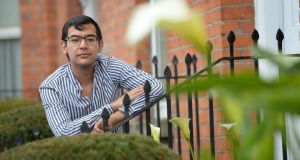 Late one evening last year, Norman Ayala’s mother was scrolling through the internet when she discovered an advertisement for an English language school in Dublin. She immediately started investigating the visa options available to Hondurans and sent the details to her son.

A graduate in business administration and tourism, Ayala was managing a local restaurant in his home city of San Pedro Sula when his mother suggested he consider moving to Ireland.

“The decision came out of the blue, she saw I could come here for eight months. It seemed like a really great opportunity to get to know Europe and improve my English.”

Ayala spent six months saving the €3,000 to pay for language classes plus another €3,000 he needed in his bank account to enter the country. He also took out a loan to cover the cost of flights, a visa and accommodation.

Having lived in the US for two years as a child, Ayala already spoke very good English. His family moved to Florida when he was 10 after his mother became pregnant with twins.

“At that time in Honduras there still wasn’t a place in hospitals where premature babies could be safely cared for. When my brothers were born they spent two months in incubators. We sold everything we owned and moved to Tampa Bay.

“It was an impactful time because I had to get used to a new culture and way of seeing things. I had to grow up really fast.”

When he was 12, Ayala and his slightly younger brother were sent back to Honduras to live with their grandparents. Six months later their parents arrived back with the twins.

As a teenager, Ayala learned to take certain precautions to stay safe in San Pedro Sula – a city which has become infamous for its homicide rate. In 2013, Honduras had the highest murder rate worldwide with 187 people in San Pedro Sula murdered for every 100,000. While homicide levels have dropped in recent years, murder remains commonplace in Honduras’ second largest city.

“You cannot walk freely around the city centre, you are at risk of being robbed or even killed. If you’re in the wrong place at the wrong time anything could happen. I was privileged to live in a somewhat safe area of the city but it’s infuriating as a person that lives there. The authorities don’t really care about people.”

The sense of security he felt on the streets of Dublin was one of the first things that struck the 24-year-old when he arrived in the Irish capital in late February 2020.

He spent his first fortnight in the country in accommodation arranged by the English language school and walking around Dublin, visiting parks, museums and bars. He initially struggled to find an affordable place to rent but eventually found a room with two Brazilian girls he had met through the school.

The landlord of the property requested a €500 deposit and €475 from each of the students to share a three-person room. Desperate to secure a bed, Ayala agreed and moved into the house within days of Taoiseach Leo Varadkar announcing the closure of all schools because of the coronavirus.

He received an email from his language school shortly after informing him that classes would continue online each morning. However, Ayala says the standard of online teaching is poor and that students only received 30 minutes to one hour of Zoom class per day.

“I thought it would be the same teacher I had before but it’s someone different. It’s a really subpar class and too simple. It doesn’t motivate you to learn. When the teacher is there in person you can ask questions and they are answered in real time, it’s more personalised.”

Ayala says his school has not offered him a refund on the €3,000 he paid upfront for classes. He believes the Government should extend the visas of foreign students for the time they have spent in lockdown so they can remain in the country to complete their courses once restrictions have been lifted.

He is also worried about the spread of the virus in the house in Phibsborough where he lives. He shares the property with 19 other people – mostly students sharing rooms with two to three other people. He takes precautions like regularly washing his hands and avoiding close contact with his housemates but says if someone in the house catches Covid-19, self-isolating will be practically impossible.

“We cannot have the luxury of getting sick here because it will spread. I’ve talked to my room-mates about taking precautions but I haven’t discussed it with everyone. The people I live with are not close friends or family, I cannot tell them to wash their hands.”

Ayala and his housemates have asked the landlord to reduce the rent for the duration of the pandemic but have had no answer. He’s now looking online for cheaper accommodation as he is quickly running out of money.

Ayala had started looking for work before the restrictions came into effect but is still waiting for his PPS number. Without this identification number he is not eligible for the Government’s Covid-19 support payment. “It’s been very stressful waiting for that number, it’s the key that everyone asks for with jobs. I was really worried about how I could sustain a living here.”

The day after we speak Ayala is scheduled to start working in the laundry room of a nursing home outside the city; a job he found through a friend at the centre. He says they were happy to hire him in advance of his PPS number coming through and have reassured him that all staff wear personal protection equipment to avoid contracting Covid-19.

Asked whether he has considered returning to Honduras and cutting his trip short, Ayala says he feels safer being in Ireland right now. “There are more cases of the virus here but Ireland has a good health infrastructure compared to Honduras. In Honduras, doctors are having a very tough time because they don’t have the equipment they need.”

Unlike some of his housemates, Ayala secured his eight-month student visa before the immigration registration office closed. He says there’s real fear and uncertainty among students who were unable to register in time regarding their legal status in this country.

“People are really nervous about what will happen. I’m also wondering whether I’ll end up spending my full eight months in lockdown in my room. Right now the main focus is getting a discount on our rent, we can’t afford it much longer.”