Patricia Kelly obituary: ‘She was out every day, between bridge and golf and aqua aerobics’

Lives lost to Covid-19: Patricia Kelly had a lifelong love of music and opera 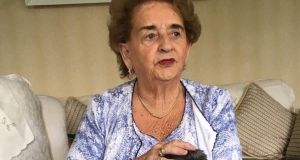 Patricia Kelly died on March 31st, in Portiuncula Hospital, where her late husband had spent so much of his working life.

“Glamorous,” is how Patricia Kelly’s daughter-in-law, Brenda Kelly, describes her late mother-in-law. “She was all style. She wore matching twin-sets, and was always beautifully turned out. One of the last things she was talking about was what would she wear to her granddaughter’s wedding later this year. She was always such fun, and full of energy.”

Patricia O’Connor was born on February 28th, 1937 in Dublin. As a girl, she was involved with the Rathmines and Rathgar Musical Society, and developed a lifelong love of music and opera. She worked in the bank and moved to Ballinasloe, Co Galway. When there, she met her husband Dermot, a consultant at Portiuncula Hospital. They married in 1961, and had four children and 10 grandchildren.

She focused on raising her family, and took up golf for leisure. She was for a period the captain of Ballinasloe Golf Club, and also played bridge.

“Honest and straight-talking,” Patricia valued the qualities of sincerity, determination and decency. As her family grew, her nickname became “Granny Pat”. Visitors to the house where she was a generous hostess were invariably greeted with offers of a gin and tonic, now known to them not as a “G and T” but a “G P” for “Granny Pat”.

When her husband died in 2013, she made a conscious decision to continue to try and make the most of life. She joined an active retirement group, and “made so many new friends” as her daughter-in-law says. With the group, she went on trips to see museums and shows and other cultural events, and they also went on a cruise; outings she enjoyed hugely. “You could hardly catch her, because she was out every day, between bridge and golf and aqua aerobics.”

She was an enthusiastic adapter to technology, and used a Kindle, joking to her family that they were all so behind the times with their books. She streamed every opera she could find; Madame Butterfly was a particular favourite. She read The Irish Times daily, and avidly followed current affairs and national and international politics.

Patricia was still living at home, in excellent health, and had just bought a new Ford Fiesta before she went into hospital on March 25th with a suspected kidney infection. She died on March 31st, in Portiuncula Hospital, where her late husband had spent so much of his working life. She had been buried before her family were told hers was the 120th death from Covid-19 in Ireland. She was 83.