Florence Wylie obituary: Businesswoman with a keen interest in fashion

Lives lost to Covid-19: ‘It was one of those drapery shops that sold everything from bras to buttons to zips’ 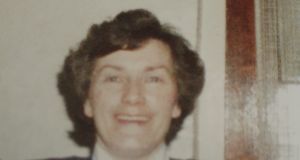 Florence Wylie was born Florence Mills on December 23rd, 1940, in Ballybay, Co Monaghan. She was one of 11 children and raised on a farm.

As a young girl she went to work in England for some years; in wool and fabric shops. She had met cattle dealer Nelson Wylie prior to travelling to England and they continued to correspond by letter throughout her time there.

The couple married and settled in Castleblayney. They had two children and, subsequently, two grandchildren. In 1964 she established a drapery shop in the town’s Main Street, which is still remembered today. “It was one of those drapery shops that sold everything from bras to buttons to zips,” recalls her daughter Helen. “People bought their debs dresses there.”

In time, Wylie moved to a larger premises across the street from her original rented property. The family lived, not quite over the shop, but next door to it. As her daughter recalls, the entire town knew the kind woman who ran the drapery could be called upon in a sartorial emergency. When she and her sister were home from college one weekend, there was a knock on the door, and a delivery of a box of chocolates to her mother.

“It was from a girl who had called to the house the week before on her way to the nightclub. She had torn her tights and my mother got her another pair. It was evening time and the shop was shut, but everyone knew where she lived. That was her all over, she was a very kind person.”

Florence Wylie always looked smart and had a life-long interest in fashion. She made regular visits to Armagh and Dublin to shop for clothes. Her daughter recalls visits to fashion shows and wholesalers. She loved to knit, was an active member of the bowls and bridge clubs and a respected member of the community.

Her husband died in 2000. In 2004, she decided to shut her shop. “What she most missed about giving up the shop was talking to people; she was such a social being.”

In 2018 she moved into Drumbear Lodge Nursing Home in Monaghan. “She loved the nursing home and went around the whole place like a social butterfly, talking to everyone.”

On April 10th she developed breathing problems and her daughters were subsequently called in.

“I was wearing the full PPE [personal protective equipment] gear and I asked her if she recognised me. She said to me, ‘I’d recognise you anywhere.’ And then she said, ‘I like that skirt you’re wearing under that.’ She was fully conscious.” Two days later, on Easter Sunday, Florence Wylie was dead. Her family didn’t know she had died of Covid-19 until after she had died. She was 79.