Alice Kennedy obituary: Tireless worker on behalf of the Irish in London

Lives lost to Covid-19: Splendid organiser who gave willingly of her time and energy 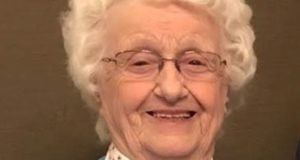 Alice Kennedy ‘worked tirelessly for others in her adoptive city, with the interests of the most vulnerable closest to her heart’.

“There was no such thing as it couldn’t be done,” her brother Seamus Culleton said of her bubbly, problem-solving personality.

A native of Clonaslee, Co Laois, she was born on March 2nd 1937 to William Culleton a Land Commission worker and his wife Mary Tobin. She was the fourth-youngest in a family of 12 and is survived by Seamus (79) and her other brothers Christy (74) and Michael (80), who all live in Ireland.

She was predeceased by her siblings – Paddy, Katherine (Kit) and Jack who had settled in the United Kingdom – Mary-Anne, Liam, Joe, Esther and Alice, the latter her sister who died in infancy before she was born and after whom she was named.

She moved to London in 1962 aged 25 and always lived in Kentish town, working first in Woolworth’s and then for 39 years for the John Lewis department store, becoming a manager in charge of complaints and returned goods.

With her retirement and the early death 10 years ago of her husband Frank, a native of Lorrha, Co Tipperary, she turned to community activism and was one of a core group who established the advice network, a support group.

“So many people had nothing in London. Some were homeless and she became involved in getting many back on the road and some back home to Ireland,” her brother said. “They also organised tea parties, social dancing and bingo, got people together and kept it going.”

From the time she went to London she always sent money home to her parents. And when her mother became seriously ill she travelled home for a weekend every month. She and her brother Seamus talked by phone every Saturday. Alice had a great relationship with all her siblings and “kind of tied us all together”, said Mr Culleton.

She also ran the Tara Pensioners’ group from a 17th floor tower block flat in Kentish Town. The group ran for 10 years until over time as pensioners died there were only a few members left.

Her organisational skills then turned to establishing the Irish Elderly Choir, keeping the Irish songs of her generation going. It toured many Irish centres across England and performed with Foster and Allen in the Royal Albert Hall.

The choir’s activities expanded to include a drama group and Irish language and culture classes which continue at the Irish Cultural Centre in Hammersmith.

Alice enjoyed dancing, music and drama and acted the role of a mother superior in A Nuns’ Chorus, a play toured by the choir.

Always active and busy, she was described as a “stalwart” of the London-Irish community by Irish Ambassador to the UK Adrian O’Neill, and “a most noble daughter of Ireland” by President Michael D Higgins.

Alice was admitted to hospital on March 25th having shown flu-like symptoms and died a week later, a priest by her side as none of her family could be with her.

Her remains were flown home and she was buried in the family plot at Clonaslee graveyard on April 22nd with a performance of Coming Home, which had been recorded individually by choir members and edited into one piece. The ceremony ended with a recording of Alice herself singing.

In a letter to her brother, President Higgins, who had met her on several occasions, said “she worked tirelessly for others in her adoptive city, with the interests of the most vulnerable closest to Alice’s heart. It is poignant, but perhaps not surprising, that her concern in recent weeks was to ensure that the most vulnerable of London’s Irish community were kept safe from Covid-19, the disease to which Alice herself was to succumb.”