What has driven the former shop workers to mount one of the longest pickets in Irish history? 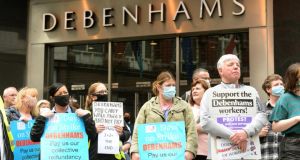 On April 9th, when the country was in lockdown, Debenhams announced it was placing its 11 shops in the State into liquidation. Some 1,000 staff and a further 1,000 working in concession outlets in the shops lost their jobs. They were already on temporary layoffs.

Since then, many of the former employees have been picketing the shops on an ongoing basis. About 90 per cent of all staff were female. On Thursday this week, it became one of the longest-running pickets in the State, exceeding the 161 days put in by the Vita Cortex workers in Cork in 2012, following the closure of the factory there.

The workers’ trade union, Mandate, has tried to reach an agreement with the liquidator that would have seen workers share a €1 million allocation on top of statutory entitlements realised from the sale of stock. However this was withdrawn when shop stewards said they would not accept it, leading to an intensification of industrial action including occupation of stores.

What is now driving the former Debenhams employees to stand on the picket line, day after day, week after week, month after month? These are some of their voices.

Laurie McCarthy: ‘This is about loyalty’

Laurie McCarthy (25) worked for 2½ years in the Debenhams Cork branch, on Patrick Street. She worked in the home wares department, and also in what she calls the “travel money” section.

“It was a bureau de change,” she explains. “We were the place where all the cruise ship people came to change their money. On a slow day, we would get 30 people. Other days, a constant steam of hundreds of people. The Americans like to deal in cash, rather than cards. A lot of people had big lumps of cash. It was busy year round. I loved it. I met all sorts of people.”

McCarthy, who worked there during college, first joined as a temp at Christmas. “No matter what department you were in, we were all friends. Everyone was nice to you and respected you.”

She does two or three shifts on the picket line a week. “For me, I know I am not going to get a huge amount of money out of this, because I am here so short a time. But I am doing it out of solidarity with the other girls. They are such good workers and such nice people. I am doing it for them, not for myself.

“This is about loyalty. I feel they that [former employers and liquidators] have forgotten that the women in there are moms and grandmothers. They grew up there. Most of them never worked anywhere else.”

McCarthy hopes to do a master’s in education, starting in March next year. “Until then, I will keep doing two or three shifts a week.”

Madeline Whelan: ‘I am not giving up now, no way’

Madeline Whelan (47) started working in Roches Stores 30 years ago. When Debenhams closed, she was in the women’s wear department, having spent her entire adult working life between the two shops.

“A lot of us grew up together working in Roches Stores and Debenhams,” she says. “Now we are growing old together. We know each other inside out. And in the last few months, we have become even closer to each other; it is the one bonus about this situation.

“We are on the picket line because of the treatment we received after all the years of working, and also the way we were told, via a generic email to all staff. There is no trust between us and them now.”

Whelan does three shifts of six hours a week. “But I could be called in at any time,” she says. “Our lives are on hold. And we are mostly women. We are also the people who have to go home to make the dinners and get the houses sorted.

“I am not giving up now, no way. We are going to keep on going on the bitter end.”

Valerie Conlon: ‘We were just numbers to them’

Valerie Conlon (56) started in Roches Stores in 1996, in the shoe department. When Debenhams closed, she was working in women’s wear.

“We found out through the media back then that Roches Stores was being sold to Debenhams, so it started there. To just get an email from Debenhams to tell you were were losing your job; it was so impersonal. We were just numbers to them.

“Throughout all the years, I was always there for staff. I remember the day we were closing because of Covid, one young woman was very upset, wondering would she lose her job over it. I told her everything would be fine; that all the shops in the country were closing for a while. When we got that email, I felt as if I had lied to her.

“We are continuing to picket, because we are doing it for everyone in the 11 shops.

“We are not going to end this picket until we get offered something better. When this is over, I will try and retrain. I will be keeping out of retail in the future.”

Seán Powney: ‘It’s an experience, being on the picket line with your mother’

Seán Powney (22) worked in the Henry Street shop for two years. He was working in men’s wear as a sales adviser. “I was there part-time when I was at college, and full-time the last year,” he says.

Powney’s mother is also a former employee. She worked first for Roches Stores, and then Debenhams. “It’s definitely an experience, being on the picket line with your mother,” he says, explaining that she has been a big social justice influence on his life.

“I know I wasn’t working there long, but this is less about me than it is about the people like my mother who worked there. We all knew each other really well. It is disgraceful to see the way they have been treated. That’s really my driving motivation: all these people were my friends as well as my colleagues. I can come to the picket line because I don’t have children, and I can represent other people who can’t be here.”

Suzanne Sherry: ‘Many of us had been there for decades’

Suzanne Sherry (48) started working in Roches Stores 24 years ago, in wedding gifts. When Debenhams closed, she was doing payroll.

“So many of us like me had been there for years, and decades. We were loyal. To be on the payroll 24 years surely proves you are a good employee.

“We lost our jobs in the middle of a pandemic. After 24 years, I didn’t have a phone call from anyone, or any email other than the generic one everyone got. Surely there was a duty of care to employees to know if people were okay. We were in the middle of a lockdown. Some people were living alone, some were on maternity leave, some had sick parents.

“The restrictions of lockdown meant we were denied our usual network of support from other staff. We couldn’t have union meetings, or meet up ourselves.”

There are some 50 people picketing 24/7 at Henry Street. Sherry does six-hour shifts. “The injustice of what happened to us is what is driving me to keep picketing. We are not going to give up.”

Amy Hourigan: ‘My whole working life has been there’

Amy Hourigan (31) was deputy store manager of the Tralee branch, which employed 70 people. She worked there 13 years. “My whole adult working life has been spent there,” she says.

“Loyalty to each other is a big part of why we are picketing. My store would be quite small and we are all familiar with each other. We are like a little family.”

At Tralee, there are about 25 people active on the picket line. They are picketing 24/7, in three-hour shifts, supported by volunteers.

“This has taken up our lives since April. You are always on the phone; organising the next step; making Zoom calls with other stores.”

As for the future? “It’s time to re-skill and see what else I’d like to do, Unfortunately retail seems to be one of the occupations hit hardest by Covid and I don’t intend moving out of Tralee, so it is unlikely to be in retail.”

On Beauty: Deal with your liver spots without resorting to laser treatment
9