People are forgetting what it's like to do their own ironing

Hilary Fannin: They say the economy is in recovery now and these successful Dragons are reassuring to have around 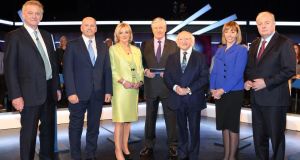 “Dragons?” The cat stood in front of me, her jaw agape in astonishment. “Dragons? There are dragons running in the presidential election?”

“You’re telling me that we might one day wake up to find a dragon in our Áras?”

“I never said that,” I hastily replied.

“So there are no dragons running for president?”

“Well, there are and there aren’t.”

“Whadda you mean, tigers?” the cat wailed, the fur on her skinny back standing as upright as an aide-de-camp.

“What? What do you mean?” she hissed through her funny little incisors. “What else am I going to find on the ballot paper? A shifty panther? A mangy lion? A vaguely depressed leopard? Next door’s barely continent moggie? What’s going on? What’s happening to my world?”

“Look, it’s really not that big a deal. A couple of wealthy entrepreneurial chaps are running for president. All right?”

“No. Look, a couple of the presidential hopefuls are businessmen, that’s all. They’re men who’ve made a lot of money in the course of their careers and who even managed to hang on to their riches after the financial crisis, while everyone else in the country ended up pawning their home gyms and trading in their seven-seaters for a pogo-stick. You with me?”

“No, I am not even remotely with you.”

“Let me explain the tarnished old term ‘Celtic Tiger economy’. It became popular around the beginning of the millennium to describe a population newly awash with SUVs and cobble-locked driveways and second properties in Roundstone and third properties in Budapest. You’re probably too dumb to remember, pussycat, but around that time a number of people on this marshy isle began to flagrantly overuse the word prosecco, as in ‘Oh tickety-boo, it’s prosecco o’clock’.”

“I’m completely lost. I have no idea what any of that has to do with our conversation about presidential hopefuls.”

“Well, some of the chaps running for president are best known for appearing on a TV show called Dragons’ Den” – the cat bristled again – “a show where aspiring entrepreneurs have their hopes dissected by a panel of rich people in swivel chairs, including a number of the putative incumbents. A show where, occasionally, nice girls who manufacture herby butter or hand soap made from goat droppings get a lump of cash invested in their business.”

“You know, I’m more confused than when we started this discussion. Why are dragons running for election?”

“Well, they say the economy is in recovery now, and people are beginning to forget what it’s like to do their own ironing, but they’re scared that the whole shooting match could go belly-up again. And these successful businessmen, these fragrant mini-moguls, are reassuring to have around.”

“You mean mongrels? Like the barking ones with the crowded antecedents? Are they running for president too?”

“No no, not mongrels. Moguls. Moguls! Men and women with excellent dental work who remind us that hard work pays off. Beacons of hope in bruising times, yadda yadda.”

“Moguls are people with excellent teeth – is that what you’re telling me? Because that all seems pretty vague and unrelated to the central question about dragons.”

“Oh look, it really doesn’t matter. Why don’t you pop off and eat your piggy-trotter gloop or lick your bottom or do something useful? I’ve got a deadline and I don’t have time to sit around pondering the presidency.”

Off she went, I’d barely written a single coherent sentence before she was back again, holding two typed A4 pages in her scabby little mitt.

“It’s my manifesto,” she mewed. “If dragons and mongrels can run for the highest positions in the land, then I don’t see why I can’t too.

“One: bring home the global cataspora.

“Is that it?” I asked her. “Is that the best you can come up with? There’s likely to be tough days ahead, there are people out there who can barely drag themselves out of bed in the mornings given the mind-boggling state of the planet, and you want to spread jelly over hard borders?”

“Mainly poultry jelly,” she yawned padding off to smell the bin.

I grabbed at her pages. She’d typed all over my latest tear-stained, nervy literary opus.

No wonder I’m in such a state. I think I might appeal to the dragons for the backing to muffle a talking cat.