Portrait of the artist on cusp of her debut exhibition

At 83, Eileen Twomey may be in the twilight years – but her enthusiasm is undimmed 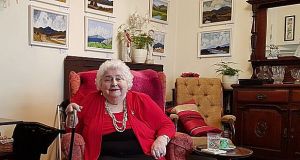 Artist Eileen Twomey at home in Donnybrook where she is exhibiting her work for the first time this weekend. Photograph: Jennifer Ryan

Just over a year ago Eileen Twomey fell in her living room in Donnybrook, Dublin, and broke her neck in two places.

In a brace and flat on her back for months in recovery, the then 83-year-old told her daughter Siobhán, “I’m not ready to go yet, I still have so much to do.”

The artist says she is “like everybody else” and adds, “I’ve no desire to go to the other side any time soon. So, to keep myself positive I was saying things like that.”

She was born in Skibbereen, Co Cork in 1934 and loved to draw as a child. But it was not until her 40s that she started to take oil painting classes, fell in love with the work of the Irish master Paul Henry and challenged herself to emulate his style.

Years passed and bouts of poor health intervened; breast cancer, a quadruple heart bypass, knee operations and the fall that broke her neck.

Painting fell by the wayside, but encouraged by the Finola O’Keefe she learned to paint with acrylics and watercolours – work she could do comfortably at her kitchen table.

“What I loved doing was pushing aside my paints and having a cup of tea and a bit of toast in the middle of the painting. I thought, ‘God, I’m getting very bohemian’,” she laughs.

This weekend Twomey, approaching her 85th birthday, will hold her first exhibition.

It is a series of 50 pieces in homage to Paul Henry, many of them hanging in the same room in which she broke her neck.

“I’m only sorry I didn’t do it sooner. I didn’t have the confidence or think I’d be able to do it to be honest with you, but now it’s the one thing that gives me terrific pleasure . . . If I had my time back I would have done it sooner,” she says.

It was the sale of her first painting last July that planted the seed of mounting an exhibition. And the bulk of the pictures on display in the living room, kitchen and along the staircase in Twomey’s house were completed in the last six months.

“I got enthusiastic about it once I decided I’d do an exhibition. I got kind of obsessed with it,” she explains.

Displaying her art for others to judge is daunting and Twomey admits she is wondering how she got herself into this, but is pleasantly surprised by the achievement.

“I never thought I’d have an exhibition . . . But anyway, I’m there now and I decided I want to see it through because I’ve often thought of things and I didn’t see them through. This will be one of the last things I see through, I’m sure.”

Does she take pride in what she has achieved?

“I wouldn’t look at myself like that, but I am getting a kick [out of it] even though it’s daunting. This is coming off and I’m nearly there now.”

The proceeds from the sale of the paintings will go to ARC Cancer Support Centres which offer support to those affected by the disease, a service Twomey has used in the past.

The all-time best mascaras for every budget
6