‘I want to say something nice, but I think I’m a bit of a control freak’

In Conversation: Kate Stanley-Brennan, aka Miss Kate and Adam Fogarty, aka MathMan 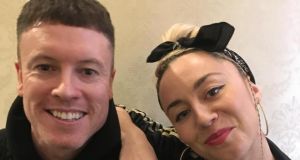 What do you think is your most dominant personality trait?

Kate: I want to say something nice, but I think I’m a bit of a control freak. That’s the first thing that comes to mind at the moment, probably because of the show [Walk For Me at Project Arts Centre]. Working on the show, I’m bossing everybody around! I’m also a very kind and loving person as well!

Adam: There’s nothing wrong with that. Being a control freak or a perfectionist means you care about it, that your vision for something has to be executed the way that you want.

Adam: I’d be quite similar. That and ambition. I’m very driven. If I want to do something, I will do whatever I can to get to that point. People shouldn’t be ashamed of that. Embrace that. When you’re creating art, that level that you’re trying to reach will not be reached unless you control it the way you want it.

Kate: Thanks Adam! I’ll keep that.

What is your greatest achievement, so far?

Kate: Writing this play and getting it put on. It was something I wanted to do, and the fact that I manifested it into something is personally a big achievement.

Adam: Mine is probably giving up everything else in my life to focus solely on music. There was a lot of stuff going on – not just negatively, but positively in terms of sport and how that was going for me – to give all of that up and make a decision that music was the avenue I wanted to put every waking moment and all my creative energy into.

What is your strongest memory from school?

Kate: Not being in it.

Adam: On the mitch?

Adam: Some people are just blessed. My strongest memory is actually just enjoying it. School in Clondalkin was great fun. We’d go to school to socialise, not necessarily about learning s**t, but just hanging out with our friends. Sport was a big part of that.

Kate: I have all my friends from when I was at school.

Adam: I had asthma when I was a kid and every summer the family used to go down to Westport, camping. I had one of the worst asthma attacks I ever had there. A doctor came out on an emergency call. It went on for about three hours, it was pretty bad. I still remember it, a horrible experience.

Kate: When I was a baby, I OD’d on my mother’s iron tablets.

What one thing would you love to buy or own?

Adam: That’s the realest answer you are ever going to get! I’d love a home studio, proper, bells and whistles.

Kate: I want that too. In my gaff.

Adam: You get the gaff, I get the studio, we’re all good.

Who would play you in a film?

Adam: Ralph Macchio has to play me. Karate Kid. He hasn’t aged a single day. He still has it.

Kate: People used to say I was like Wednesday Addams, so maybe Christina Ricci.

If you had the option right now to change one thing about your life, what would that be?

Kate: I regret not singing earlier. I did when I was in New York, but when I came back to Ireland I was too shy. I wrote in secret for about seven years. Once I broke the seal of it, I was like ‘what was I worried about?’ I wish I had done it earlier.

Adam: We feel the same way about a lot of things.

What advice do you give to people who come to you looking for some?

Kate: Get rid of the inner judge. I always say to younger actors: don’t compare yourself to anyone else. You have to follow your own path, and everyone’s path is completely different.

Adam: That’s a good life lesson. What I say to guys and girls is that you have to perfect your craft, whatever your discipline is. You have to work harder than the guy or girl sitting next to you.

What is your go-to snack?

Adam: You little rocket! That’s it. Especially if your ma makes it with a nice cup of tea. I’m co-signing that one, you cannot go wrong.