Michael Harding: ‘My indigestion turned out to be a heart attack’ 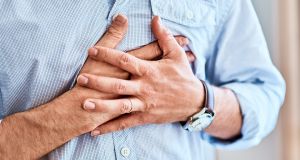 “Dr Google assembled for me an array of reassuring possibilities.” Photograph: Getty

For three months at the end of 2018 I toured the country, doing readings from my books, and by the first week in December I had only three gigs left to do. It was a wonderful tour; from Tralee to Letterkenny, and from Carrickmacross to Wexford. The only calamity was when my radio microphone went dead one night on stage in Bray, even though I had bought a new battery for the headset that afternoon. But it only took me a few seconds to replace it and I was back in business, sharing stories about life as a bewildered male and how I cope with the comedy of ageing.

I was tired as I walked off stage and I didn’t sleep well, so the next morning I treated myself to a full Irish breakfast, and then went for a walk on Bray’s beautiful seafront promenade. I was only at the beginning of the walk when a pain between my shoulder blades lashed me to the railings and I was forced to shuffle back to the car.

“Maybe I should have resisted those big sausages,” I mused, remembering the breakfast. Because I was clearly suffering from indigestion.

I was due on stage in Blanchardstown that evening so I headed up the M50 towards exit six. All around the Blanchardstown Centre, early morning shoppers were already stuffing gift parcels and shopping bags into the rear ends of a thousand cars in the car parks.

I checked into a hotel nearby and went to my room on the seventh floor. Far below the traffic moved bumper to bumper around the square, brake lights twinkling beyond the curtained windows. I lay on the bed for most of the afternoon.

In the theatre that evening the technical manager said, “You look tired,” as we sound-checked the microphone.

I had a coffee and a Kit Kat in the dressingroom, as I stared into the mirror and waited for 8pm.

I had no pain on stage. But as soon as the talk was over, and even before I had returned to the dressingroom, a muffled knot of pain crept across my chest, up my neck, and down my arms.

All I could think of was that breakfast; rasher and egg, with black pudding, and three big sausages.

“I definitely should have skipped the sausages,” I muttered.

I presumed my heart was in excellent condition. I spent years walking around the beautiful hills above Lough Allen. I gave up cigarettes when I was 40. I have walked over Sliabh Liag in Donegal twice and endured the freezing fog of Warsaw streets on winter nights. How could there be anything wrong with my heart?

In my hotel bedroom the pain persisted, so I phoned the beloved.

I should have asked her did she know anything about heart attacks, but I didn’t want to worry her.

“There’s something wrong,” she said. “What is it?”

My heart, like a caged bird, was screaming for attention. But I kept talking about sausages.

After the phone call I lay awake in the dark.

I felt as if a blacksmiths’ anvil was lying on my chest. Although when I moved my body into different positions, the pain went away. And eventually I fell asleep.

I woke at 7am. It was still dark. But the pain was coming with the regularity of ocean waves.

I reached for the laptop and googled “indigestion”. It was my final act of denial.

And from the infinity of the internet, Dr Google assembled for me an array of reassuring possibilities. For example, if I stretched my neck in various directions, the indigestion would dissipate. And so I did. And sure enough the pain diminished. Clearly the problem was indeed, indigestion. Clearly a few exercises would cure it.

So, having lost all ability for rational thought, on the seventh floor of a four-star hotel, I stood pot-bellied in my pyjamas and began leaping through half remembered tai chi movements, like a Taoist master drowning in quicksand, or like a duck trying to dance the lead in Swan Lake.

And the pain dissolved.

“There you go,” I exclaimed, triumphantly at the mirror. “Nothing to worry about.”

But then the pain returned. This time like the front of a bus, impacting on my chest at high speed, a pain bigger than my body seemed capable of sustaining. And I knew, beyond all shadow of doubt or delusion, that I was indeed having what even Dr Google would have recognised as an acute heart attack.