‘When Hitler came’: Holocaust survivor Kurt Kleinmann and his need to ‘never forget’

‘It hit me very strongly, realising the many times my father and brother nearly died’ 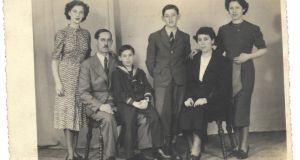 Holocaust memoirs are many. Kurt Kleinmann makes it his business to lay his hands on every last one of them: “I have a need to not forget,” he states firmly.

And yet he has every good reason to want to forget, for his own family’s story is as tragic as it is miraculous.

“The thing about my family’s story, is that you have murder, as in my mother and sister [who were murdered at a Minsk concentration camp] and you have survival – my other sister and myself – and then you also have the element of rescue with my father and brother,” he notes.

In 1939 Kleinmann – now 89 and living in New Jersey – was a normal nine-year-old growing up in Vienna. He fiercely admired his 16-year-old brother, Fritz, and they would bond by taking the mattresses from their father Gustav’s upholstery shop and using them to create a street circus.

This idyllic childhood was shattered by the event Kurt refers to simply as “when Hitler came”. That year Fritz and Gustav were arrested by the SS and sent to Buchenwald, where the concentration camp was under construction. On his first day, Gustav began writing a secret diary; one that would surface years later. Gustav alone was selected for transfer to Auschwitz, but Fritz refused to be parted from his father and begged to be transferred to Auschwitz himself. It barely needs to be said that the two suffered a catalogue of torture, misery and near-death there for six years.

That said, The Boy Who Followed His Father into Auschwitz, written by historian Jeremy Dronfield with contributions from the surviving Kleinmanns, is no common-or-garden Holocaust account. That both Gustav, a decorated first World War soldier, and Fritz both survived Auschwitz is one thing. Quite another, though, is the experience of the spirited, rebellious, formidable Fritz.

“He got food from civilians and shared it with his friends, and then was able to convince civilians to bring guns into the camp,” says Kurt. “Eventually, he survived by swapping identities with a dead man. Some of these stories are almost incomprehensible to me.”

The rest of the Kleinmann family in Vienna, meanwhile, were arranging their own survival. Kurt’s oldest sister, Edith, fled to England in 1939 to work as a maid, while their mother, Tini, had managed, via a well-connected associate, to acquire a permit for Kurt to escape to the US. The arrangement couldn’t have happened at a better time.

“I do remember a few tough situations [in Vienna] with a kid from the Hitler Youth,” he recalls. “Another kid injured me so badly that I ended up in hospital, but when we went to the police, I had to apologise to him as he was Aryan.”

Although Kurt has vivid recollections of his life before Hitler came, his transfer to the US is a period in his life he has scant memory of: “The last thing I remember is my mother sitting me down and the kitchen table and telling me to behave myself,” he recalls. “I have no memory of saying goodbye to anyone, the train journey from Berlin to Lisbon, or the boat trip. I do remember [in the US] being served Brussels sprouts at dinner and thinking ‘I’d better eat them’ and getting sick.”

Kurt ended up in Massachusetts, living with Judge Samuel Barnet and his family. A sunny, privileged childhood was laid out in front of him, and he assimilated quickly, soon becoming became a typical all-American boy.

At 10 he enrolled in the second grade: 12 weeks later he had graduated through the classes to fifth grade.

In 1946 the near unthinkable happened when Kurt was told, via telegram, that his brother and father were alive. By then an American soldier, he was able to visit them in Vienna when he was stationed in Europe. Still, it wasn’t as smooth a reunion he might have hoped for. He had lost most of his German, while his family had little English.

“My brother ended up with communist leanings and I was an American soldier, and my father was adamant, ‘No politics in the house!’ I didn’t get to hear all of these stories until years later.

“When I eventually talked to Fritz and asked him ‘How did you exist there?’, he told me, ‘Well, every day wasn’t awful. We kidded around. We played tricks on the SS’.”

“Although when my father’s diaries were published and then translated into English, that hit me very strongly, realising the many times they both nearly died.”

Kurt is aware that Holocaust survivors are dwindling in numbers: of the 1,000-odd children transported to the US alongside him, only about 200 survive. Yet their stories, he notes, are more urgent than ever.

“Obviously I have strong feelings about Holocaust deniers who say that the killing of six million Jews is a hoax,” he says. “My concern is that kids in high school don’t know anything about the second World War.”

Of the rise of right-wing politics worldwide, he adds: “I’m not a Trump supporter by any means, and I’m very much concerned with the rise of anti-Semitism in the US and what I’m hearing about neo-Nazis in Europe. These sort of things should never have happened again, but unfortunately they very much are, all over the world.”

The Boy Who Followed His Father into Auschwitz by Jeremy Dronfield, is out now via Penguin Books