As I walked out of hospital I was overwhelmed with gratitude. I wanted to hug the entire hospital and everyone in it 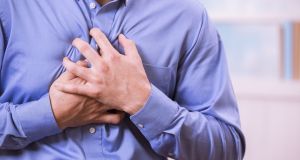 “I was lucky. Not just because I live in Europe and can afford health insurance. But because the paramedics, were so superb at their job”

On the morning of the heart attack, I phoned 999 from my hotel room. I asked for an ambulance and gave my room number. But I forgot to alert hotel reception. So when the ambulance arrived the hotel staff knew nothing about it.

The paramedics told the receptionist that the call came from room 725.

The phone beside my bed rang.

“Good morning sir,” the receptionist said, “did you order an ambulance?”

One paramedic handed me a tablet. 'Don’t swallow,' he said. 'Chew it first.'

I wanted to say, “No, I ordered poached eggs.” But the tension at the reception desk might have been exacerbated if I tried to be funny.

The hotel manager wanted to find out what had happened in room 725 so he came up in the lift with the paramedics.

Moments later two young men in high-visibility jackets were standing over me, with aspirin, and other tablets, as I lay stretched on the bedThe hotel manager remained at the door.

A mother and daughter pushing suitcases along the corridor stopped to gawk, until the manager discreetly closed the door.

One paramedic handed me a tablet. “Don’t swallow,” he said. “Chew it first.”

I chewed like a dog with a morsel of bone. For some reason I was talking to myself. “Apparently Robert Lowell died in a taxi,” I declared.

The paramedics didn’t hear me. They wheeled me to the elevator, down to the foyer and out the front door, into the back of an ambulance.

I’ve seen a lot of ambulances taking people away; from supermarkets, public houses, and hotel foyers. It’s always the same; the ambulance arrives and the blue light spins. Another casualty of life is wheeled to the waiting vehicle. The back doors are slammed shut and the ambulance screams away into the morning traffic. Now it was me in the lead role.

“I’m sorry to have bothered you,” I said to the paramedic, as we sped through the traffic lights and criss-crossed Blanchardstown. “It was just indigestion.”

And we were; and for a few hours my life, as they say, was in their hands.

I remember waking in the night and seeing a nurse staring into my eyes.

“Are you okay?” she asked. Her oval face and brown skin were lit by almond eyes.

“Where are you from?” I wondered.

“Am I dreaming?” I wondered.

“No,” she said. “You just had a heart attack. Tomorrow the consultant will put in a stent. There is nothing to worry about.”

Which wasn’t exactly true. I was worried that I might need to use the toilet.

“We can get you a bed pan if you need one,” she said. I closed my eyes and tried to sleep.

The stent was inserted the following afternoon; a near miraculous procedure whereby a scaffolding is placed inside the clogged artery to allow a free flow of blood.

When I was young a heart attack often signified sudden death somewhere casual, like the 9th green of the golf links.

The procedure was executed with precision by the dexterous hands and eyes of a heart surgeon who spoke gently to me, as I lay on the table before him. For some reason I got the notion that he might be from Kerry, and so, considering the masterful precision and dexterity of that county’s champions in both football and dancing, it seemed reasonable to believe that a Kerry man would excel equally well at heart surgery.

I tried without success to engage him in conversation about Skellig Michael, Orthodox monks and Kerry dancers, as I lay flat and almost naked on his table, with a gigantic television screen above my head and various people in eggshell blue uniforms moving about the operating room.

When I was young a heart attack often signified sudden death somewhere casual, like the 9th green of the golf links. And surgery, when required, left scars from the neck to the belly button. Men wandered the hospital corridors in dressing gowns with despairing faces and in dreadful pain.

So I was lucky. Not just because I live in Europe and can afford health insurance. But because the paramedics were so superb at their job. Because the nurses in the emergency room, and the registrar, the surgeon and all the rest of the staff were so unrelenting in their diligence. And as I walked out of the building three days later I was overwhelmed with gratitude. I wanted to hug the entire hospital and everyone in it. Because I got my life back again.

And all because of their dedication. People who despite overcrowding, difficult hours or poor pay and conditions, choose to be there, and ready, day and night for whatever comes in the door of the hospital emergency room.