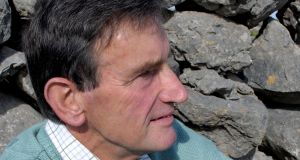 Dr Con O’Rourke has inspired future generations of scientists through his passionate work on promoting the sciences – particularly biology – and his enthusiasm for the natural world. Born in Dublin on July 21st, 1936, he was the son of Tomás O’Rourke and Ruby Sheehan, both teachers, and his interest in science was fostered by his mother, a UCD science graduate. He also owed a lot to his excellent education in Coláiste Mhuire in Parnell Square.

He and his wife of 56 years, Anne Cullen from Wicklow, met as students in UCD. Con graduated from UCD in 1959 in agricultural science, later obtaining his PhD from Cornell University in New York. He returned to Ireland to work with Teagasc in Carlow and Dublin as a research scientist and editor, using his fluent Russian to liaise with the USSR. He retired in 2003.

A committed voluntary officer of the Royal Dublin Society, he served on the council, board of management, and as chairman of the RDS science committee. Also president of the Institute of Biology of Ireland, he was elected to Fellowship in 1989.

Other academic roles include clerk of convocation of the National University of Ireland, extern examiner to regional technical colleges and committee member of the Royal Irish Academy.

His love of the Irish language and of wildlife was entwined with his love for the Aran Islands which he visited regularly for over 80 years, running nature courses as gaeilge, particularly on Inis Meáin.

“Con was an enormous inspiration to the students – making them see the island with fresh eyes, looking with newness at the rocks, plants and wildlife there”, said Claire Murphy from the RDS science committee. “He made his teaching magical. Very rare to have a group of young people silent – they were hanging on his every word!” Many later went on to pursue their interest in both Irish and wildlife. His work on promoting awareness of the uniqueness of the Aran Islands culminated in his publication of A Nature Guide to the Aran Islands and Dúlra Oileáin Árann.

Con had a private pilot’s licence. His habit of steering with his knees while taking aerial photos of crops through an open cockpit made an indelible impression on his passengers.

In 2000, he set off in a three-seater plane to Tiree and Barra in Scotland in search of Flùr a Phrionnsa (Calystegia soldanella) – the plant that linked Mo Ghille Mear (Bonnie Prince Charlie) to Ireland. Aisling nic an tSithigh, one of the team of wildlife volunteers commented “Con was a Prionnsa i measc na Flùr”.

He was a prolific letter-writer to The Irish Times. Whether regarding the pros and cons of organic or genetically modified food, or the non-adoption of the metric system, his focus was always on science, integrity and the truth.

He was made honorary life member of Pembroke Cricket Club in 2003 in recognition of his decades of work on grounds maintenance.

Sandymount Tidy Towns gave him an award for his tireless removal of graffiti in the area. Honorary secretary Mary Ryan said, “Every neighbourhood needs a Con”.

Former colleague, Norman MacMillan, captured his essence: “Our respect for Con was absolute. Personally, I cannot say there is a man I have known with more integrity”.

Life is busy. This can be difficult for a new vegetarian such as me
8

From Ireland to the US: a brief migration history
9