Michael Harding: ‘Christmas 2019 is a return to the things of the heart’

I notice again what is beautiful in the Christian tradition, rather than being defeated by it 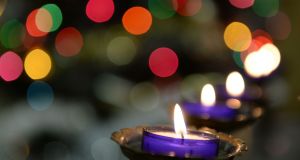 ‘When I had vested and came out on to the sanctuary to begin the liturgy I noticed a young man as slim as a reed in the back pew. He remained there beyond the reach of the lights, standing in a long dark coat throughout the service.’ Photograph: Frank Miller

I worked as a curate in a rural parish many years ago and I rose early one particular Stephen’s Day to go to the church and read the Mass.

There was nobody on the road at that hour. The ground was white. The bare trees glistened with frost. The door of the church was jammed with ice and difficult to open.

Inside I flicked on a switch and the aisle flooded with light and my breath appeared as a little fog before my face.

There was rarely anyone to join me on St Stephen’s morning. But when I had vested and came out on to the sanctuary to begin the liturgy I noticed a young man as slim as a reed in the back pew. He remained there beyond the reach of the lights, standing in a long dark coat throughout the service.

I wondered perhaps if he might have been out all night at a party, got emotionally distressed and fled at dawn to the church for refuge. Sometimes young men burn themselves out during the night before turning to religion at daybreak.

Or might he have been in the hospital keeping vigil with a dying parent? Or perhaps he was just depressed, and grew fearful through the night of what he might do alone in his bedroom. I certainly couldn’t figure him out.

When I raised the wafer at the moment of consecration, I sensed him staring at the white orb of bread above my head with great intensity. Was he thinking that this thing is only bread, and this priest is just a fool? I don’t know because he fled before we could talk.

When the Mass was over, I disrobed in haste and rushed around to the front door, hoping he might come for breakfast to the parochial house. My mother was staying with me and I knew she was up because I could see smoke in the chimney from the kitchen range.

My mother was good with young men in trouble. She had a hen’s instinct to embrace all the little broken chicks in the world. And I would have been glad to introduce him to her. She would have cooked him rashers and sausages, and extracted more information from him about his mental condition than half a dozen psychotherapists could manage.

But there was no sign of him on the road when I looked. No car in sight. Only footprints in the snow.

In my experience it was usually sorrow rather than joy that drew people to the church at Christmas. Many people sought refuge from their own particular hell on earth; often associated with alcohol, drug abuse or sexual violence.

So I guessed the young man was unhappy, and perhaps just to avoid a fight at home had risen early and went out walking.

But I was sorry I missed him.

It was an unhappy childhood that first impelled me to pray, and to reach out to the angels around the crib when I was a 10 years old. I loved Christmas, but especially the stillness in the convent chapel in Cavan early on Christmas morning.

On one occasion I heard a cry behind me as a little nun fainted. Then there was a flurry of other nuns as they emerged from behind a lattice grill, and the sound of their starch habits swishing along the aisle as they gathered around the fainted one, and commissioned a few strong men to carry her outside. I wasn’t certain if it had been dehydration or fasting that caused her to faint, or if God in the Eucharist had exposed himself to her in some terrible and sacred intimacy.

It’s been a long road for me, since then. The scandals and revelations of corruption in the institution almost finished me with religion. I spent years in the wilderness of secular confusion and moral indignation, before a Tibetan monk rescued me from moral righteousness and from the hubris of believing in my Self.

But more recently, in the glow of numerous Russian Orthodox icons, I have begun to notice again what is beautiful in the Christian tradition, rather than being defeated by what is wrong with it.

So I have come full circle. Although I know less with my mind and more with my heart as I get older.

The Kerry philosopher John Moriarty used to tell a Sufi story about a man fumbling at his front door for his keys. They had fallen to the ground. But it was dark outside the door so he couldn’t see them. However, further down the street a lamp spread a pool of light on the ground, and so he went there and began to search for the keys where there was light.

“What are you looking for?” a passerby wondered.

“And did you lose them here under the lamp?” the passerby asked.

“So why don’t you look over there?”

“Because over there it is dark; the light is here.”

Moriarty relished this story as an example of how we search with the light of logic and our rational minds for the keys to happiness, but we rarely search in the dark irrational and mysterious spaces of the human heart, where the keys can be found.

For me Christmas 2019 is a return to the things of the heart. I become a child again, as I read the old stories of the child born in the stable, with my heart’s eye.

And indeed the story of a young pregnant woman in a strange town, hoping for refuge in any hostel that will have her, is a story of particular poignancy and relevance in the Leitrim of 2019.

As for the young man in the church, who stood in the dark shadows long ago, the question remains: who was he? Or why does he remain in my memory?

I have no answers. But sometimes now I whisper to him. “I don’t know you – but you are welcome.”