Sean Moncrieff: Yes, I am living vicariously through my daughter 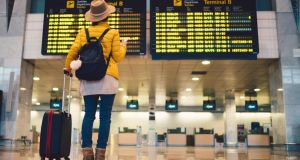 I watched her walk into the airport, mask already on, carrying a bag full of clothes she’d stolen from her sisters, along with an invincible hope that the future will be better. Yes, it will. Photograph: Getty Images

I dreamed that we were on holiday: a place we’d flown to many times and always enjoyed. But for some reason that my dream director didn’t feel the need to explain, it had been a while since we had last visited. The place had changed. Many of the restaurants and shops had closed, and there were too many people, crowded on to the pavements.

And then myself and Herself got separated in one of these crowds leaving me with Daughter Number Four. We entered a large shop where Daughter Number Four wanted to read some of the books for kids. (This is a dream. In the real world she’d zoom towards the toys or sweets.)

But I lost her too. I searched everywhere, and then also realised that my phone was missing, so I couldn’t ring Herself.

Eventually, I found the two of them together. They were perfectly happy and unaware of my crisis. And it was only then that I noticed that in all the places I had searched, no one was wearing a mask.

As far as I know, that was my first full-bore Covid stress dream. I think dream interpretation is utter nonsense, but that won’t stop me: the holiday location was London and the missing child was really Daughter Number One.

A bit like myself – actually, rather a lot like myself – Daughter Number One’s way of dealing with lockdown was to be doing something. Not work: she has one of those 21st century jobs I don’t understand that she can do from anywhere. This was to fill up the rest of her time for Lockdown 2. She recited a long list of projects in a voice that, even to my emotionally tone-deaf ear, sounded like she was trying to convince herself.

My raw terror and anxiety dreams have been balanced by a huge dollop of joy: to see her happy again, to see her move on with life, even if it does mean wearing a mask most of the time

She’d become marooned in our house. Early this year, she had moved in for just for a few weeks, a pit stop between Galway and London, where she’d been offered work. Then the pandemic hit and she had no option but to wait it out. Eventually, things got a bit better here, but it was still dodgy in London. Then it got dodgy here again.

But a second offer of work in London shattered her faux-positivity: to be replaced by the real thing; an enthusiasm I realised I hadn’t seen in her in a long time. Covid isn’t going away any time soon, so she might as well move. It was time to start living with it.

Within days, she and a friend found a place to live that’s around various corners from people they already know. Just for fun, I spent several hours googling the area along with words like “murder”, “kidnap” and “Covid”. The old parental logic that I’ve lived in far worse places wasn’t really a comfort; nor is the knowledge that location isn’t really that significant. She could be murdered anywhere.

But my raw terror and anxiety dreams have been balanced by a huge dollop of joy: to see her happy again, to see her move on with life, even if it does mean wearing a mask most of the time. It still gives me shudders to think of her there; of the adventure. London will suit her. And yes, I am living vicariously through my daughter. What hobbies do you have?

This isn’t the first time she’s moved out, yet somehow this feels more momentous. London isn’t that far away, but the complications of Covid make it feel like 1950s-style emigration. There will be no weekend visits over or back. For the time being, she’s going and staying there.

She flew last Monday. I was fine. Not a bother. I was a rock. Steel-jawed and even-voiced. I watched her walk into the airport, mask already on, carrying a bag full of clothes she’d stolen from her sisters, along with an invincible hope that the future will be better. Yes, it will.