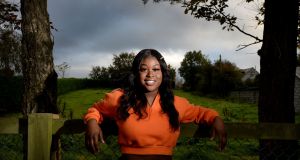 ‘If an opportunity comes, I’ll take it’: Victoria Adeyinka, who has 11 million followers on TikTok, the highest in Ireland, near her home in Drogheda, Co Louth. Photograph: Alan Betson

Victoria Adeyinka still remembers the first video that earned her over a million views on TikTok. It was January and users of the app were marking the beginning of a new year with the Goodbye 2019 challenge, which saw participants writing the year 2019 on different surfaces – the sand, the sink, even a toilet bowl – and erasing it.

The Drogheda teenager saw the videos and decided to hop on the trend. “I was like, ‘I’m going to put my own spin on this,’” she recalls. Using her fingernails, she wrote the year onto her skin. She then applied a dollop of moisturiser, rubbed it in and made it disappear.

The video garnered 1.7 million views as well as thousands of likes and comments. Its success pushed Adeyinka to keep making videos and posting content. She soon branched out into making short comedy sketches about her parents, her teachers, her Nigerian heritage and more. “Just relatable things,” she says.

Her videos have resonated with followers from around the world, particularly in the United States. Addison Rae and Dixie D’Amelio, two of the most followed creators on TikTok, follow her on social media. On YouTube, video compilations of her funniest TikTok videos have been viewed millions of times. She even has her own page on Famous Birthdays, an online database of celebrity birthdays.

So how exactly did a teenager from Co Louth become a global TikTok sensation?

Adeyinka was born in Drogheda and grew up with her parents and two brothers. (Her older brother Tom Adeyinka is an acclaimed drill rapper, better known as Offica.) She attended St Oliver’s Community College where she was a self-professed class clown. She graduated earlier this year against the backdrop of the pandemic.

She first downloaded TikTok last November, months after many of her peers and classmates. “For everyone else, TikTok was popping last year in July but I was never on it,” she says. “I didn’t even know what it was. I thought it was cringey. Everyone did.”

After a few weeks of messing around with it, she decided to dip her toe into the world of content creation. “I was like, ‘Okay, this app looks cool and it’s crazy what it’s doing for other people so let me post some content on it,’” she recalls. In the video, she could be seen dancing with a friend in a classroom to Get Silly, a song by American rapper V.I.C.

It wasn’t long before she found her voice, however. Adeyinka had never acted or performed before, but discovered she was a natural comic. “People think I’m naturally funny so I made videos to enhance it,” she says. She started posting short comedy sketches in which she lovingly parodied her parents and teachers. In one sketch, she poked fun at mothers reacting to seeing a sex scene on television. In another, she joked about your teacher not allowing you to use the bathroom when you really need to go.

Soon, she found herself getting recognised in school.

“I remember I was sitting at a table and these girls were staring at me,” she recalls. “I was like, ‘What are you looking at?’ Then I remembered it was probably from TikTok so I said, ‘Hi guys!’ and they were like, “We know you from TikTok!’ and they started pointing at me and telling their teacher.”

When the country went into lockdown, she started posting multiple videos per week to keep herself occupied. “I was bored,” she laughs. “The boredom got to me so I was just going crazy.”

With people all over the world flocking to TikTok in search of distraction, she quickly found an audience on the platform. In July, she crossed one million followers. Since then, she has added 10 million more. “It’s crazy,” she says. “I just thought I would have 100,000 followers for the year. Maybe even forever.”

The key to her success? Consistently posting original and creative content. She has posted nearly 390 videos since she first joined TikTok. It’s hard to come up with new ideas, she says, but she works at it and often spends hours prepping, planning and recording her sketches.

“Sometimes I just look up in the sky and say, ‘I have an idea!’” she says. “But some days I’m like, ‘What am I going to do?’ and I go through my old TikTok videos and see what I haven’t done before.”

Her parents are hugely proud of her success, she says. Her mother has even featured in a handful of videos. “She loves the attention,” she laughs. “People have come into her work to take pictures with her.”

Over the last few months, she has received all sorts of offers. But while many in her shoes would have transitioned into social media influencing, she has opted to bide her time and see what comes out of her newfound fame.

“If an opportunity comes, I’ll take it,” she says. “A good one. I don’t want to make a mistake and jump into the wrong one. I’m just waiting.”

“Whatever happens, happens. I’m just going with the flow.”