Try out geocaching, make a sock puppet or take in some time-travel adventures on TV – and there’s an easy one-pot wonder to cook for dinner 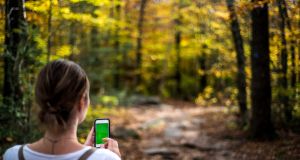 Geocaching requires a device with GPS, and the app, to find caches hidden all over Ireland by fellow players. Photograph: iStock

Lilly Higgins’s Mexican Red Rice is a tasty one-pot wonder that will save on the washing up, but also packs plenty of nutritional punch.

Method:
1 Heat the oil in a large heavy-bottomed pan. Add the spring onions and carrot. Sauté for five minutes, stirring, before adding the garlic and spices.

2 Stir for another minute to toast the spices then pour in the tomatoes and water. Season well with salt. Bring to the boil then add the rice. Leave to simmer with the lid on for 20 minutes.

3 Remove from the heat. Add the kidney beans and stir thoroughly with a fork. Place the lid back on and leave to steam for a further 10 minutes.

New on RTÉ, Blasts from the Past features Emily Blast, an ordinary teenager with an amazing secret – she’s a trainee time traveller. Using the Time Surfer App on her phone, Emily jumps through time to recover missing historical objects. Today, she’s on a quest to retrieve St. Patrick’s crozier, to help him abolish the snakes out of Ireland. The episode also features Daniel O’Connell and his mammy. Oh, and some mathematical Celts, whatever they are. Showing at 4pm on RTÉ 2 all week, or via the RTÉ Player.

Enjoyed Pokemon Go or the other popular augmented reality (AR) game, Ingress? Now might be the time to try your hand as a family at Geocaching – an activity where participants use a GPS system to hike and seek containers, or “caches”, that have been hidden by fellow users all over the world. These are called “dead drops”, not unlike that bit in spy movies where one person tapes an envelope to a park bench and another person comes by later to pick it up. A great alternative to gaming, and you’ll cover plenty of ground in the open air as a bonus. To get started, download the Geocaching apps from the Google Play or Apple Store. There are caches all over Ireland, so the smart money says there are plenty to be found within your 5km radius. See geocachingireland.com for pointers on how to get started.

Spleodar, the much-loved children’s arts festival, is moving its activities online for its 20th year (October 24th-31st). There are several activities to keep little ones entertained on the website throughout the day, from storytelling and music workshops and theatre productions. Right through the week, there will be interactive workshops (with packs to be issued for families in advance of the events). Kids, for instance, will also be able to create their own Sock Puppet at home with Niamh Lawlor of Púca Puppets. See spleodar.ie for information on all-ages events for the entire festival.