Seán Moncrieff: Meh is the most sensible feeling in ‘these difficult times’

Our bad days contain a quality of nothingness: an emotional state best described as Meh 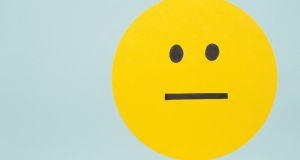 Like many other facets of our culture, language is subject to fashion. Phrases pop up, infect our discourse and soon after that become clichés.

For instance, pretty much every radio advert seems to start with the words “In these difficult (or challenging) times . . .”

Another example you hear a lot of is people saying: It’s okay to have a bad day; though, probably out of kindness, it’s never explained what a bad day consists of.

It could be screaming or wailing or a lapse into profound silence. I suspect a lot of the bad days we’ve been having contain a quality of nothingness: an emotional state best described as Meh.

Back in early March, I got a bit excited when I learned that the Book of Mormon was coming to Dublin: which, if you don’t know, is a musical devised by the blokes behind South Park and the guy who wrote Let It Go from Frozen. It has won loads of awards and has been massively successful in New York and London. But, far more importantly, for my juvenile tastes, it’s scatological, irreligious, probably offensive and very, very funny.

So, I booked tickets. But they never arrived as the lockdown slammed shut just days afterwards. I imagine the promoters of the tour and the Bord Gáis Theatre still don’t know if the show will make it here for December, or later, or at all.

Yet I still see buses advertising the Book of Mormon: like time became stuck a few months ago; a continuous present. They advertise films that aren’t showing in cinemas that are closed. They advertise holidays we won’t take.

There’s been nothing new. Meh.

Now that the lockdown is easing, there are other things we should get back to doing. We just don’t know what they are

Because, you know, these are difficult times, and there’s not much else to do, we’ve probably been treating ourselves to a bit more wine than before. The Friday night glass also makes on appearance on Wednesday. And maybe Thursday, because that’s almost Friday. And Monday because it’s the start of a long, difficult week. These are, after all, difficult times.

There’s shopping. Not in shops, of course. It’s hard to imagine that we’ll ever want to do that again with much enthusiasm: wearing an asphyxiating face mask while following the prescribed route through TK Maxx, trying to keep two metres away from the other shoppers and worrying whether it’s safe to try on clothes that other people have touched. Shopping is online, and it’s often impulsive: because there is a distinct dopamine hit when the doorbell rings and a package arrives. Even when it’s just a replacement mop.

But that doesn’t last long, and we go back to Meh, along with a low-level anxiety that we’re wasting money when we should be saving for the economic apocalypse.

There are TV shows and films to binge, but we may be sick of that now. There are books still to be read, but we’re oddly unenthusiastic about opening the next one. Anyway, now that the lockdown is easing, there are other things we should get back to doing. We just don’t know what they are. Meh.

What I’m describing might be a low-level depression. I know I’ve felt it. You may have too. But that’s not necessarily a cause to go rushing for pills or counsellors. We don’t have to pathologise everything. Because in these challenging times, a bit of depression seems a perfectly reasonable response.

The feeling of Meh may also have another function. Because things have changed. There is the daily news that our emotional blankness has rendered us almost inured to. Every day we get the alert about infections and fatalities, and find ourselves saying: nine deaths. That’s not bad.

In another set of circumstances, in the world before, our previous selves would have been horrified. But it’s not indifference. It’s self-protection.

Approaching 60 and wanting a change, we moved to weird and wonderful Portland
Real news has value SUBSCRIBE