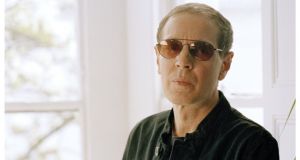 The career of Scott Walker, who has died aged 76, followed one of the most extraordinary trajectories in popular music. It took him from chart-topping 1960s pop star to reclusive creator of albums such as Tilt (1995), The Drift (2006) and Bish Bosch (2012), which were works of experimental strangeness that dared critics to try to define them. Nonetheless they commanded the respect and even awe of other artists. “He’s been my idol since I was a kid,” said David Bowie, while Radiohead’s Thom Yorke, Brian Eno and Jarvis Cocker were similarly inspired.

Walker, whose later work was more likely to provoke comparisons with Francis Bacon’s paintings than with other musicians, professed himself content to walk his own unique path.“I have long since stopped worrying about fitting in in any way,” he told the Observer’s Sean O’Hagan in 2008. “I’m an outsider for sure. That suits me fine. Solitude is like a drug for me. I crave it.”

The contrast between the almost invisible Walker of his later years and his early pop-star self could not have been greater. As a member of the Walker Brothers – three Americans who came to Britain in search of success – he scored three top 10 albums in the UK between 1965 and 1967, Take It Easy With the Walker Brothers, Portrait and Images.

He will be remembered as the resonant, burnished baritone voice on some of the most dramatic singles of the era. The Burt Bacharach/Hal David composition Make It Easy on Yourself (1965) was their first UK chart-topping single. The same team took them back to the top of the UK charts the following year with The Sun Ain’t Gonna Shine (Anymore), another odyssey of heartbreak. The yearning melodies and his blond good looks established Walker as a pin-up, but he never felt comfortable with the frenzy of teen hysteria that accompanied their success. In 1966 he fled to a monastery for a week.

The group’s hot streak tailed off, Walker had begun drinking heavily, and in 1967 they split up. “Initially, it was fantastic, and I learned so much,” he said in 2018. “I got to work with huge orchestras and good budgets. But after a while, the formula . . . wore itself out.”

Born Noel Scott Engel in the small mid-west town of Hamilton, Ohio, he was the only child of Elizabeth (nee Fortier), a French-Canadian, and her husband, Noel Engel, a geologist who worked in the oil industry, his work prompting the family to move around a lot. His parents divorced when he was six, and Scott and his mother later settled in California. A child actor and performer, his first stage appearance was in a Rodgers and Hammerstein production, Pipe Dream, in New York when he was 10.

He was initially championed by the singer and TV host Eddie Fisher, who featured him on his show, but after he lost interest, Engel abandoned his singing career to become a session bass guitarist. He teamed up with the guitarist John Maus, a former child television star, and in 1964 the Walker Brothers were born, the name coming from Maus’s false identity card which he used in Los Angeles clubs. Joining forces with the drummer Gary Leeds, who had played with PJ Proby in Britain, the trio recorded the Barry Mann/Cynthia Weil song Love Her at RCA Studios in 1965. John was originally the lead singer, but the song suited Scott’s baritone voice and he became the frontman.

Persuaded by Leeds, who had told his band members about swinging London, the Walker Brothers flew to Britain. They landed at a snowy Heathrow Airport, quickly found a management deal, and saw Love Her become a top 20 hit. Walker was to stay in the UK for the rest of his life, taking British citizenship in 1970.

Following the band’s split, Walker’s solo career got off to a flying start with his first album, Scott, a UK No 3, while Scott 2 the following year reached No 1 and Scott 3 (1969) also reached No 3. All of these successfully mixed original Walker compositions (including such superb songs as Montague Terrace (in Blue) and Big Louise) with those by Belgian songwriter Jacques Brel – whose tales of madness, sex and death fascinated Walker – and other writers, such as Bacharach/David and Tim Hardin. But his fortunes changed abruptly when Scott 4 (also 1969), all written by Walker, failed to chart. When rock was being defined by Led Zeppelin and the Rolling Stones, Walker’s orchestrations and semi-operatic baritone felt out of time.

Walker reformed the Walker Brothers in 1975, a reunion that gave them a hit single with a cover of Tom Rush’s No Regrets. Their album Nite Flights (1978) failed commercially, prompting the group’s final collapse.

The group’s disintegration ended Walker’s live career, his last appearance being a stumbling performance in cabaret in 1978. Walker temporarily forsook the music industry. He worked as a painter and decorator, undertook a fine art course and made a cameo in a Britvic drinks advert.

In 1995 he released Tilt, his first album in 11 years. “On the surface, there couldn’t have been a more unlikely transformation,” the Guardian wrote. “Imagine Andy Williams reinventing himself as Stockhausen.” Harsh and industrial, there were traces of music from Bali or Japan, and in Farmer in the City Walker could have been an operatic tenor singing a cantata.

With each new release into the 21st century, Walker pushed boundaries. The Drift (2006) found him experimenting with dissonance and unusual tunings, creating lugubrious soundscapes seemingly intended to evoke some form of purgatory. “It’s just generally big blocks of sound, raw and stark,” he said. Bish Bosch (2012) took the form even further, mixing in everything from Hawaiian folk song to drum loops, heavy metal guitars, a cappella harmonies and a full symphony orchestra in songs that discuss history, philosophy and medical procedures and Attila the Hun’s court jester. For Soused (2014), he paired up with “the shroud-wearing Seattle drone metallers” Sunn 0))), a project that Walker described as “pretty perfect”.

He is survived by his partner, Beverly, his daughter, Lee, from his marriage to Mette Teglbjaerg, which ended in divorce, and his granddaughter, Emmi-Lee.

As lockdown begins to lift, once again I feel like a trapped bird
10