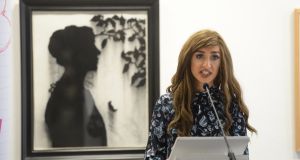 The patient advocate and ardent promoter of the HPV vaccine Laura Brennan has died of cervical cancer at aged 26.

In the last 18 months of her short life, Brennan made a massive contribution restoring public confidence in the HPV vaccine, after a drop in uptake of the vaccine to 51 per cent in 2016. Following a diagnosis of cervical cancer in December 2016, she volunteered to join the HSE campaign for HPV vaccination of teenage girls [to prevent cervical cancer]. By becoming the most memorable public face of the advertising campaign, she helped return uptake levels of the HPV vaccine to 70 per cent.

The role Brennan played as a patient advocate in encouraging the uptake in the HPV vaccine will save many lives according to Dr Rita Doyle, the president of the Medical Council.

Brennan “was deeply admired and loved” according to Stephanie O’Keeffe, the HSE director who oversees the HPV role out who said the the public recognised her openness, bravery, courage, big hearted and social consciousness in the last 18 months of her life. The State owed her a debt of gratitude, according to Minster for Health Simon Harris, who met her several times and described her as kind, funny and full of life.

Brennan also worked with the World Health Organisation on their European HPV awareness campaign and spoke at HPV advocacy meetings in the United States. She was awarded the inaugural Royal College of Physicians of Ireland patient advocate medal in September 2018, an honorary doctorate from University College Dublin in December 2018, and Clare Person of the Year in March 2019. The Irish Society for Gynaecological Oncology set up the Laura Brennan award for patient advocacy in November, 2018.

Known for her zest for life, Laura was the youngest of four children and only daughter to Bernie and Larry Brennan. She grew up in Ennis, Co Clare. A friendly and chatty child, she became a sales representative after attending St Flannan’s College. More interested in sport than academics, she won an All-Ireland Féile medal in 2006.

She was described by her family as the light in the life of everyone who knew her. An open-hearted and generous spirit, she often spoke with gratitude about her family and friends. “My joy comes from the people I surround myself with, my family are so so incredible. I have the most amazing mother and father, my three older brothers are just incredible, I have six very very close friends and that’s my circle. They uplift me and we bounce off each other.”

Brennan continued to work during her first round of treatment for cervical cancer but later dedicated herself to campaigning for the HPV vaccine that hadn’t yet been introduced when she was in school. She spoke openly about the arduous treatment for her cancer yet maintained her positivity and sense of humour.

Broadcaster Ryan Tubridy, who interviewed Brennan, said: “her great ambition in life was to work at a makeup counter, she got it. She was obsessed with The Greatest Showman, she loved it. When she came on the Late Late Show, we walked her on to ‘This is Me’, one of her favourite songs. The other thing she wanted was to go to Copper Face Jacks and she did. She got the gold card and she went to Coppers and she managed to get into the audience at The Toy Show.”

Positive throughout her illness, she told Tubridy, “I am so, so incredibly lucky, I have the most fantastic friends and family. I really believe you have the power and control of how much happiness you have in your life.”

The RTE television documentary This Is Me, in which Laura Brennan tells her own story, will be broadcast later this year.

Laura Brennan is survived by her parents Bernie and Larry and her brothers Colin, Fergal and Kevin.