Irish schoolchildren brutalised in the name of religion

Family Fortunes: Physical abuse reached frightening level for me and my classmates 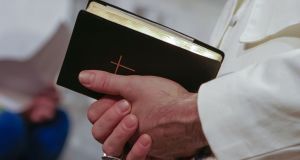 Looking back now to those days and that place brings a great awareness to me how religious righteousness breeds in people the ability to exact horrendous deeds in the name of a God.

Second Mass on a Sunday morning in 1950. Schoolboys were seated at the very front of the chapel on the men’s side. There were at least six rows of seats allocated solely for the pupils of the local primary school. I was among them, with my younger brother, who was four years of age. As I was seven he was my responsibility. He hadn’t as yet started school but was obviously deemed mature enough for Mass attendance.

We sat in silence waiting for Mass to start. Directly behind, in splendid isolation in a seat all for himself, was the master, the principal of the boys’ school, regarded by the priests and parents as a saintly shepherd to the flock of children. We children held a much different view.

Soon the altar boys – with our older brother amongst them – appeared with the priest in tow and, just when all had taken up their positions, in my childish opinion a very funny thing happened. My young brother recognised our older one. Instantly he was out of the seat and hitting for the altar rails calling his name.

Quickly I went in pursuit and nabbed him before he got to the rails, and then the split-your-sides laughing started. Even though he was three years younger he was almost as big as me in both height and weight, so a wrestling match ensued. However, my greater power won the day and I got him back to our seat with difficulty.

Mass over, we dallied with our friends and eventually reached home. To my horror my father was waiting. We had brought disgrace to the family. He had been seated near the front and was mortified. Three whacks of his belt on each hand was my punishment despite my protests of innocence.

The next day at school I had to march before the Shepherd. Once again my protests went unheeded and three whacks of his crook on each hand left me experiencing what Irish schoolhouse abuse felt like. I had disgraced the school and its teachers. A year later the Shepherd’s assistant for second and third classes brought the physical abuse to a frightening level for me and my classmates.

Looking back now to those days, and that place brings a great awareness to me how religious righteousness breeds in people the ability to exact horrendous deeds in the name of a God. School and Catholicism interwoven like the coloured threads on a piece of embroidery. Catechism, Mass, confessions, Communion, benediction, devotions, sodalities, nine Fridays, fasting, the one true church, the chosen people heaven awaiting. Our protestant neighbours we firmly believed doomed to eternal damnation.

We have come a long way and it took a long time, but thanks be to enlightenment.

Marie Cassidy: ‘People think they know me because I’ve a bit part on a TV show called the news’
4

Lucky pup: How to dress up your dog this Christmas
9