Sean Moncrieff: ‘I often want to applaud gorgeous women. But that would be creepy’

Gawping at them is the same thing. It’s depressing that I have to point this out. 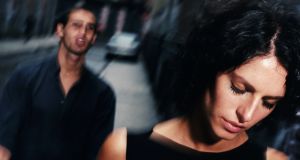 Street sexual harassment: in our house, it’s happened not just to Herself but also to Daughters One, Two and Three. Photograph: Getty Images

In our house you can have a dose of the Covids: meaning, not the virus itself, but the ennui and vague grumpiness that comes from our various degrees of complicated lockdown; that sense that there’s nothing to look forward to.

Yes, we should appreciate that we have our families and puppies are cute; that today some people will be mad enough to try to celebrate Halloween – kids in Hazmat suits, disinfected sweets handed out on long poles – yet we are still all entitled to the occasional cranky day. And by occasional, I mean regular.

It was starting to work a little too, when a man – maybe in his 40s, not drunk or outwardly crazy looking – hove into view.

I’m guessing that a startlingly high proportion of the women reading this column might suddenly have found themselves grinding their teeth. Because a startlingly high proportion of women have had a similar experience. In our house, it’s happened not just to Herself but also to Daughters One, Two and Three. On countless occasions random men have felt they have the right to comment on their demeanour, their clothes, their hair. It’s happened on public transport. It’s been shouting at them from passing cars or building sites.

Oh, but it’s only a bit of fun. Yet this “fun” is singularly aimed at women and in a tone that implies that the woman should be delighted about it. It’s a compliment. Because women love compliments. They wear skirts and make-up and like to look nice. And who do they do that for, if not for men? Thus, passing men can hold up their score cards like judges at a celebrity dancing show. The “compliment” is in fact a declaration of what women are for: to look decorative. Smiling completes the effect.

More depressingly, the men who dole out these compliments from their big bag of largesse are often baffled when a woman might be irked by it. Welcome to Stepford.

Of course, this is only one iteration of the street sexual harassment many women experience, much of it dressed up as Banter. And on that, two points:

1. It can happen to men too. Bouncers and waiters particularly are regularly groped by drunken women assuming that they’ll love it because, you know, they’re men. They don’t.

Back on the street, Herself didn’t provide the requested smile. Instead, she surprised herself. And him. Sick of her Covid fog, sick of being told how to be by strange men, she found herself screaming at him: a stream of invective containing words and sentiments that I won’t reproduce here. The man sloped off, no doubt wondering why women are so psycho when he was only trying to have a bit of fun. But perhaps chastened enough not to do it again.

And when the shaking stopped, Herself found she was feeling much better. A bit of screaming did her the world of good.