Sean Moncrieff: When your child is sick you don’t ring around for a few quotes

Who of us at some point hasn’t witnessed the human value of a nurse? 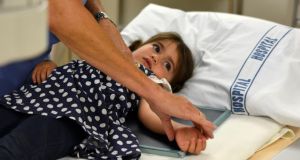 ‘As a society, we say it all the time – the doctors and nurses and paramedics were all fantastic. There just weren’t enough of them’ Stock photograph: iStock

As most parents know, the one way to bring about a miraculous recovery in a sick toddler is to bring them to hospital.

Within seconds of arriving in A&E, they can morph from disturbingly ill to bounding around the waiting room and wanting to go on walks to the vending machine.

Not that anyone who has been in this situation would blame them; including hospital staff. Toddler physiology can be as unruly as toddler personality.

The paramedics were fantastic. So too were the doctors and nurses at the hospital

Like her siblings before her, daughter number four decided that it was her turn. A runny nose suddenly transformed into a startlingly high temperature, then vomiting, unresponsiveness and light hurting her eyes.

This is a set of symptoms that terrifies every parent: so terrifying that you don’t even name what it might be. In such circumstances, you don’t worry about future mortification.

You get them to hospital.

An ambulance was called. It took an hour and half to arrive.

This wasn’t some remote rural spot, but suburban Dublin. On a Tuesday morning.

In fairness, the emergency operators were up front about there being a delay.

They rang back regularly to check on daughter number four, and when the vehicle eventually arrived, the paramedics were fantastic.

So too were the doctors and nurses at the hospital.

She was almost immediately triaged, and while she was very sick, they quickly established that at least it wasn’t the horror we had feared. We went back to the waiting room.

She was seen by a doctor five hours later. Five hours trying to explain to a toddler – who has yet to develop any understanding of what ‘the future’ means – that we will eventually go home. But relatively speaking, we were fortunate.

Daughter number four had two parents with her. Other adults were there alone, trying to comfort distressed babies and haul the mounds of equipment that go with them.

And I’ll say it again – because as a society, we say it all the time – that the doctors and nurses and paramedics were all fantastic.

The problem was that on this (presumably) pretty average day in the Irish healthcare system, there simply wasn’t enough of them.

We know there are shortages. We know that the main reason for this is the miserable wages so many of them are paid.

This is to do with values; or a lack of values.

Our society is broken down into economic units. Sandwiches. Shoes. People. We provide services or labour and we are paid in return.

The only criteria for how much we are paid is how much employers are prepared to shell out. How valuable or not this work might be isn’t considered.

Of course, what is valuable can be highly subjective.

Some people will pay €100 for a bottle of wine. Other people wouldn’t pay €10. People will differ on how much they are prepared to pay to get the washing machine fixed.

If you’re lavishly remunerated for what you do, good on ya. Choice and competition can be a good thing.

Yet it’s difficult – no, it’s impossible – to see how any of these arguments apply to the health of a citizen, old or young. When your child is sick, you don’t ring around for a few quotes.

You don’t hold interviews to see who is the best qualified. You don’t do a cost-benefit analysis on whether it’s worth treating the baby.

Because the ‘value’ of protecting a child, a parent or a partner is one that cannot be expressed by economics.

In the real world, we are motivated by far more than so-called rational self-interest.

There’s a need to feel valued, for our personal biographies to make sense.

There’s love. Yes, value can be subjective. Yet who of us at some point hasn’t witnessed the value of a nurse?

The best places for a family lunch: try these 10 great spots
6

What will €25,000 buy in Italy, Spain, Hungary, France and Co Roscommon?
Real news has value SUBSCRIBE