Called into the principal’s office, Ross discovers his son has a crush on the classroom assistant 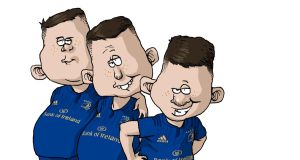 Leo sticks his head around the door of the office, fixes poor Jill with a look and goes, ‘You know who you’re a ringer for? Olivia Culpo!’

We turn up at the Montessori to collect the boys and Mrs Perezynski says she wants a word. It wouldn’t be an uncommon occurrence for me and Sorcha to find ourselves in a school principal’s office having to apologise for the behaviour of our children. But they’ve only been back in the place a week after the whole head lice incident and I can tell that Sorcha already has her hackles raised because she’s muttering things out of the corner of her mouth about “victimisation” and the “United Nations Convention on the Rights of the Child”.

So we’re morched into the office and I notice that Jill, one of the classroom assistants, is sitting there on a hord chair with a grim face on her – like someone in Argos waiting for their number to be called.

I’m like, “Hey, Jill – how the hell are you? Sarries, huh?” because you can usually banter with her about rugby. “God, I wish that Munster dude had decked Billy Vunipola when he had the chance.”

Sorcha’s like, “Is this about the nits? Because my husband and I have dealt with the problem.”

Which is true. I had all their hair chopped off. They look like three shaved coconuts.

I’m there, “If any of their classmates are hopping with the things, it’s definitely not their fault?”

“No,” Mrs Perezynski goes, “this has nothing to do with them bringing head lice into this institute of learning”.

“Institute of learning?” I go. “Would you wind your neck in? You’re a Montessori teacher. A babysitter with good insurance cover.”

Some people don’t like being reminded, of course. What does Sorcha call it? Telling truth to power?

Sorcha’s there, “Why exactly have you called us in here then?”

Mrs Perezynski goes, “Because one of your boys – namely Leo – has developed a crush on Jill.”

Look, if this was just a harmless crush then I wouldn’t have bothered mentioning it to you. But it’s the inappropriate language that goes with it

I laugh. Out loud. No choice in the matter.

I’m there, “You’re not actually serious, are you?” because – with the greatest will in the world – Jill’s not great.

“I’m afraid I am serious,” Mrs Perezynski goes. “And we can’t condone that kind of behaviour.”

I’m there, “Condone that kind of behaviour?” unable to believe what I’m actually hearing. “Lots of kids have crushes on their teachers. God, I used to send Valentine’s cords to the woman I had in High Babies – what was her name? She had a funny eye that turned outwards and she was always sucking a Locket.”

“Well,” Mrs Perezynski goes, “we have protocols for this kind of thing”.

“The protocol in Constance Markievicz National School in Sallynoggin was to just ignore it – until the kid tried to hump your leg. Then you were entitled to throw a bucket of cold water over him. God, there were many afternoons I spent sitting on the radiator, drying out.”

The woman just glowers at me.

I look beside me and I notice that Sorcha is staring at her phone. “Do you have a printer in this office?” she goes. “Because I want to print you out a copy of the United Nations Convention on the Rights of the Child.”

We’re some double act, it has to be said.

“I was hoping we could resolve this without the UN,” Mrs Perezynski goes, suddenly sounding more reasonable than she did before. “Look, if this was just a harmless crush then I wouldn’t have bothered mentioning it to you. But it’s the inappropriate language that goes with it.”

Sorcha’s like, “Inappropriate language? What are you talking about?”

“Then, this morning, he asked me out for a drink in front of the entire class.”

“He said to me, ‘So where do you tend to do your socialising?’ and then he sort of winked at me.”

I can suddenly feel the weight of Sorcha staring at me.

“Those are your lines?” she goes.

“Those are your chat-up lines. ‘Hey, Gorgeous!’ and, ‘Where do you tend to do your socialising?’”

“What I’m saying is, where did Leo hear you use those lines? More specifically, who the hell were you talking to?”

I don’t want to say anything to incriminate myself but my money would be on the girl who works on the salad counter in Brambles in Dundrum and looks like Olivia Culpo.

Mrs Perezynski fake-smiles us. She’s there, 'I think I’ve made my point. I just think you, as Leo’s parents, need to have a conversation with him in relation to boundary issues.'

I’m there, “I swear on my mother’s life, Sorcha, I have no idea where he might have picked it up. I’m genuinely racking my brains here.”

At that exact moment, there’s a knock on the door and it ends up being Kerry, one of the other teacher assistants.

She’s like, “I’ve got three little boys outside in the corridor here who are keen to go home!”

Mrs Perezynski fake-smiles us. She’s there, “I think I’ve made my point. I just think you, as Leo’s parents, need to have a conversation with him in relation to boundary issues.”

And that ends up being the last straw. There are two areas of my life where I will not have my record questioned. The first is as a kicker. The second is as a parent.

I’m certainly not going to sit here and listen to someone tell me that my children’s behaviour is my responsibility – especially when I’m paying them 600 yoyos per week, per child to look after them.

Sorcha’s there, “Ross, we need to resolve this.”

I’m like, “No, we don’t. Because we’re taking them out of this so-called school.”

“There’s really no need for that,” Mrs Perezynski goes, suddenly thinking about the nearly two Ks per week she’s going to be losing.

Sorcha goes, “Ross, where are we going to send them instead?”

It’s one of those “huge if true” moments. But Sorcha doesn’t even get a chance to respond. Because at that exact moment, Leo sticks his head around the door of the office, fixes poor Jill with a look and goes, “You know who you’re a ringer for? Olivia Culpo!”

And I’m just like, “Come on, Sorcha. We’re not going to sit here and take the blame for this.”