Confessions of a millennial house plant addict: Cacti are the new cocaine

Laura Kennedy: Succulents are the new gin for the misunderstood millennials 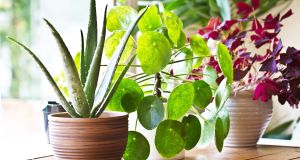 You can build a jungle of plants in a rented property without asking anyone’s permission. Photograph: iStock

I don’t flatter myself with notions of originality, so it doesn’t quite come as a blow to realise that I am, in fact, witheringly derivative in many of my interests. As a millennial, I have significant sympathy for the argument that we get a stinker of a time in many respects, one being that the word “millennial”, almost always used as a pejorative, has sort of become a euphemism for “idiot young person”.

This is, of course, deeply unjust, mostly because millennials aren’t even particularly young any more – the eldest of us are now around 38. Imagine our chagrin, then, when we hear members of Gen Z, also known as iGen (the first generation born into a world with the internet as we now recognise it), and born between 1997 and 2012, dismissed as “millennials”. Listen, we millennials are precisely as concerned and bored by their weird fashions and fauxctivism as anyone else. Indeed, we are as far from iGen as we are from the boomers, whose history of fiscal flatulence we blame (rightly or wrongly) for our inability to own homes or have children before we hit our late 30s and our joints start to ache in damp weather.

The point is that I like house plants. I like them very much indeed. Admitting to this comes at a minor social cost, as the online houseplant movement is growing at the strangling pace of bindweed. Instagram is groaning under the weight of accounts devoted to impressive and unusual houseplants, chicly styled in the rental homes of people around my age.

Cacti are the new cocaine, and succulents are the new gin. Why go out dancing in hot pants when you can turn your living room into a nursery, put on your pyjamas and quietly propagate a ficus while you listen to a podcast? The movement – part of me simply perishes writing that, so let’s say “trend” instead – is coming out of the United States.

According to its National Gardening Association, US house plant sales have exploded by 50 per cent in the past three years, to $1.7 billion. The monstera deliciosa, or Swiss Cheese Plant, feature of many a home in the 1970s, is back in force, with small versions of its rarer variegated form selling for more than €100 on sites like Etsy and Amazon.

This is the part where people pile on us poor, indulged millennials – “No wonder they can’t buy houses; spending their money on fancy plants that aren’t even hallucinogenic,” and all that. Perhaps the world is going mad, or perhaps just people in their late 20s and 30s are, but I know why I enjoy taking care of my plants.

Firstly, because I don’t own my home and may never own one. I have to phone my landlord to ask him whether it is okay if I hang photographs of my family on the wall. This is fair enough – property is the possession of its owner, not its occupier, but it does feel infantilising.

A 36-year-old friend of mine was recently (informally) threatened with eviction for the crime of letting his little daughters keep two goldfish in their rented home. The fish subsequently “ran away” while the girls were at school. But you can build a jungle of plants in a rented property without asking anyone’s permission, and the worst the landlord can accuse you of is oxygenating the place.

I don’t have a garden or access to one. I take an hour or so each Sunday and spend it with my plants – I repot what needs repotting, I check them for infestations, water and feed them as needed. If any of them isn’t looking too spry, I’ll move it and try it in another spot. Last week, I bought my first orchid on sale, despite the fact that I secretly associate these magnificent, alien plants with the inner window sills of unsavoury looking massage parlours and the waiting rooms of waxing salons.

My plants are good for my head – I couldn’t give a fiddle leaf fig if that makes me derivative, or an indulged millennial.

Paul Flynn: Three delicious dishes you can bank on this weekend
10