This Stoneybatter restaurant’s food is delicious. Just ditch the spirulina and up the service 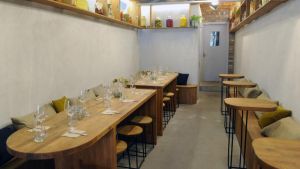 Sometimes we seem to be doubling down just for the hell of it. Like last January when Irish consumers were actually buying more meat than the January before. As the Eat-Lancet Commission on Food, Planet, Health study raised big questions about our diets and everyone was Instagramming their overnight oats with nut milk, we didn’t seem to give a sausage that consuming too much meat is killing us and the planet.

The richer we get the more meat we eat. Fillet steak sales are as reliable a prosperity index as sun cream in a heat wave. And that’s part of the uphill slog for a vegan restaurant. Is vegan food virtuous? Yes. Is it a luxury after a long week spent bringing home the bacon? Not on your nelly.

So Beo feels different. It’s a new vegan wine bar in Dublin’s Stoneybatter. The smell of Stoneybatter is “yoga mats and chips”, my husband’s friend once remarked. Beo smells of new plaster, which is has been left raw and unpainted. This is a beautiful fit out, wooden tables, stools and high-up shelving with gleaming jars of fermented foods: lemons, dehydrated kiwi slices and a sardine-tight jar of long red chilli peppers.

Beo feels more glamorous than any other Dublin vegan operation. It feels very Japanese restaurant in Berkeley rather than stone’s throw from Hanlon’s Corner

Beo feels more glamorous than any other Dublin vegan operation. There is no bottled still or sparkling. The water is filtered and free, the loo roll is ethically beige and unbleached and the hand wash is an expensive brand found in health-food stores. It feels very Japanese restaurant in Berkeley rather than stone’s throw from Hanlon’s Corner.

Ethna McDermott is the woman behind Beo. She trained as an architect and switched to a life as raw vegan chef, training in LA before travelling around the world. Her chef for this venture previously worked in a one-star Michelin restaurant in New York, and in a five-star Dublin hotel. The pastry chef came from the same hotel.

There are four of us so we decide to share two 10-course menus (€48), a five-course (which is €28) and a couple of small plates, which will mean we’ll eat everything they have to offer. Someone recommended the strawberry wine. It’s Mónéir from Wicklow and has the sweet syrupy smell of childhood jam day, all nettle stings, overripe fruit and wasps.

I don’t like vegan versions of favourite staples. I’d rather not eat a burger than have a seitan one. But the nearest Beo skirts to the idea is their “cream cheese” with flatbread and pepper, which is a tasty pile of house-made breads with a creamy dip. Butter beans and mushrooms, maybe? Turns out it’s made with cashews, sunflower seeds and probiotics. The “cheese” has puddles of olive oil in it so vehemently green it looks like it has either been Instagram filtered or had some spirulina added. This powdered algae will feature a few times.

Service is slow. “I really get it,” our Sicilian friend says as the evening stretches out with long lulls between courses like a sagging washing line. His foodie friend Enzo “would call this a journey,” he says.

When I phone up a few days later to find out some more details, McDermott tells me their chef was away the night we visited and she was standing in.

And those courses are delicious. There’s a crisp purple rice puff that tastes like a Ranchero with sweet onion jam and fennel puree, along with the beet three ways – pickled, pureed and sliced fine with a carrot purée.

There are excellent house crackers, a tomato gazpacho with a beefy slice of tomato and teeny wedges of cherry tomatoes with fennel

The chef’s plate small plate is full of tasty things, the best of which are the vegetables, which look like themselves – like the excellent kimchi and the scrolls of fermented kohlrabi folded in on themselves. Fermented cherry tomatoes fizz with blousy flavour. A “root mousse” is (I’m guessing) celeriac purée and it’s topped with a delicious dark crisp tuile sprinkled with dehydrated apple chunks and tiny cubes of pear with a slash of spirulina across the whole thing.

There are excellent house crackers, a tomato gazpacho with a beefy slice of tomato and teeny wedges of cherry tomatoes with fennel. We all love the kale with fermented kohlrabi folded around more of the “cream cheese”, nuggets of dried fig and reishi mushroom.

The only dish that doesn’t work is a mushroom broth with toasted buckwheat groats. The bitterness of the buckwheat and more spirulina takes this too far along the astringent scale.

There’s a sweet cucumber sorbet with chilli that’s like a slushy and then a lovely dessert with shards of meringues made from chickpea water that taste powdery and magically like egg-white versions.

We’ve moved past the stage where the stereotype food critic harumphs about how nothing tastes good without butter and cream and cooking without them is like juggling with one hand tied behind your back.

We admire the skill it takes to make things delicious without reaching for the two easiest shortcuts. If they solve the pace issue and ditch the spirulina (don’t care how good it is for you, it tastes like powdered grass compost) then Beo will be brilliant. Food that’s beautiful and good, in every sense.

Dinner for four with eight wines by the glass came to €218.50

The Great British Bake Off: The contenders to become the new host
6

Two €10 wines to try: a vibrant Sauvignon Blanc and a fruity Bordeaux
9

Turnkey Terenure home with windows on the world for €1.795m
Real news has value SUBSCRIBE