Black dresses a dominant theme at the TV awards, with the actor giving the LBD a twist 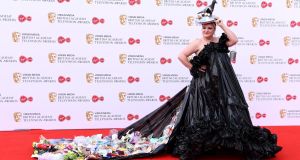 This Country: Daisy May Cooper at the TV Baftas. Photograph: Jeff Spicer/Getty

Black high-end ensembles were a dominant theme at last night’s Bafta television awards, in London, where Daisy May Cooper led the black-dress parade – with a twist. The English actor, who was nominated for her role in the BBC Three mockumentary This Country, ditched a traditional design in favour of a bin bag.

Put together by her mother and two friends, the one-shoulder ruffled bin-liner dress, which had a flowing train, made a statement: “I decided I would donate the money I would spend on a normal dress to a food bank,” said Cooper, who also wore a pigeon-topped dustbin lid as a fascinator and carried a small bin as a handbag.

Who are you wearing this evening? “A sixteen litre bin bag…” 🤣
A statement arrival from Female Performance in a Comedy Programme nominee Daisy May Cooper #ThisCountry #BAFTATV pic.twitter.com/8NvPyQM9IJ

The red carpet also offered a dazzling line-up of looks from Phoebe Waller-Bridge, Ruth Wilson, Rochelle Humes and Holly Willoughby, among others.

Helping to take her Villanelle character to style-icon status, on and off screen, Jodie Comer wore a one-shoulder purple gown by Stella McCartney before scooping the best-actress award for Killing Eve. Her costar Fiona Shaw took home the best-supporting-actress award for her role as Carolyn Martens in the spy thriller.