Ross O’Carroll-Kelly: ‘Deep down she actually hates that I’m the cool parent’ 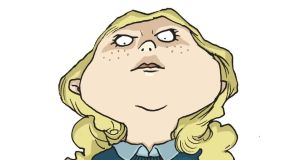 Honor: “What the fock is going on? Who were you talking to?” Illustration: Alan Clarke

Sorcha tells me to look at the time. Which I do. It’s, like, six o’clock in the evening and I’m not really sure where this conversation is going.

“Honor’s been at a birthday porty for the last three hours,” she reminds me. “And we still haven’t had a call from the parents demanding that we come and take her home.”

“Okay, how many play dates has she been on that resulted in us receiving solicitors’ letters?”

“Someone has to. I mean, you’re, like, wilfully blind to her faults? She’s got you wrapped around her finger.”

“Is it, Ross? What, allowing your children to manipulate you into giving them everything they want while allowing them to do whatever they want to do?”

“Exactly. And I happen to be very good at it.”

Which kills her. I know deep down she actually hates that I’m the cool parent.

I’m there, “Me? I was about to grab a stick of Heinemite and scribble down my thoughts on the Sarries match. It’s the final this weekend, Sorcha. The goys are going to be looking for my analysis.”

She goes, “Your analysis is going to have to wait,” and she says “analysis” like she doesn’t believe it’s an actual thing. “The porty finishes at six.”

“It’s a house in Watson Pork.”

She’s the rudest, most obnoxious little madam I’ve ever met. And the parents have no control over her – she’s allowed to just run riot

So I grab my cor keys and I head for Watson’s. The whole way there, I think about my daughter and how she’s very like Owen Farrell in a lot of ways – as in, she has her critics and there’s something about her face that tends to rub people up the wrong way, but I wouldn’t swap her for anyone in the world, except obviously Johnny Sexton and maybe Beauden Barrett when he’s on form.

Halfway up Watson Pork, I spot the house. There’s, like, balloons on the gateposts out front. I pork the cor outside. The door is wide open, so I let myself in. The gaff is full of kids. I walk through the noisy throng down to the kitchen, where I can hear, like, grown-ups talking.

I’m about to walk in there and introduce myself – being very much a people person – but then I hear something that stops me dead in my tracks. It’s, like, a woman’s voice, going, “She’s the rudest, most obnoxious little madam I’ve ever met. And the parents have no control over her – she’s allowed to just run riot.”

“That’s no surprise,” I hear another woman’s voice go, “given who her father is. He’s some rugby player. Or failed rugby player. Yeah, no, my husband remembers him when he was a teenager. Every bit as awful as the daughter, he said.”

“Apparently,” some dude goes, “her brothers are even worse. They’re allowed to do whatever the hell they want.”

I stand in the doorway of the kitchen and I clear my throat to get their attention. They all look at me. They’re like, “Oh, hello!”

But I end up just glowering at them until one of the women – I’m presuming it’s her actual gaff – goes, “Is everything okay?”

And I’m like, “That’s my daughter you’re slagging off!”

The atmos in the kitchen suddenly changes. They’re all like, “Errr…” nearly choking on their Prosecco.

I’m like, “You should be ashamed of yourselves. She’s only a kid. And let me tell you something else – she’s a great kid. Did you know for instance that she has her own fashion vlog with, like, 94,000 subscribers?”

They didn’t. That much is obvious from their reaction.

I’m there, “And those brothers of hers who you also slagged off? Would it surprise you to hear that she’s actually an amazing sister to them?”

And there ends up being a seriously awkward silence in the room. I’m there, “I’m glad you’re all embarrassed,” helping myself to a slice of birthday cake and a glass of Prosecco. “Slagging off a little girl who you haven’t even bothered to get to know. I actually feel sorry for you that you’re never going to get to see my daughter’s amazing, amazing qualities. As a matter of fact, I pity you – every single one of you.”

Do you know what? You were actually right. She is awful. You can hang on to her

And that’s when my phone storts vibrating in my pocket. I whip it out. It ends up being Honor. I answer it. She goes, “Where the fock are you?”

I look around. There’s no sign of her. And a horrible feeling suddenly comes over me.

I’m like, “Your old dear said the porty was in Watson Pork.”

Honor goes, “Yeah, she’s actually losing it. I told her, like, 20 times it was Watson Drive, the stupid cow.”

At that moment, the woman of the house returns to the kitchen with a girl of about 10, who – I hate to be judgmental – looks like a complete and utter wagon.

The kid looks me up and down and goes, “He’s not my dad!”

The woman’s there, “Now don’t be like that, Begnet. I’ve got a little porty bag for you to take home.”

Begnet goes, “I don’t know who this focking asshole is – but he’s not my dad.”

“Do you know what?” I suddenly go. “You were actually right. She is awful. You can hang on to her.”

Then I knock back my Prosecco and I walk out of the house.

I’ve still got Honor on the phone, by the way. She goes, “What the fock is going on? Who were you talking to?”

And I’m like, “No one, Honor. God, there’s some really obnoxious kids around here, isn’t there?”

“Well, just to warn you in advance,” she goes, “I upset someone at the porty and you’re probably going to be getting a solicitor’s letter.”

And I’m like, “Not a problem, Honor. I’ll get Hennessy to send them one right back. See you in a minute.”