Stefanie Preissner: ‘You couldn’t pay me to go back to my 20s’

The Can’t Cope, Won’t Cope creator says everyone should learn how to say no 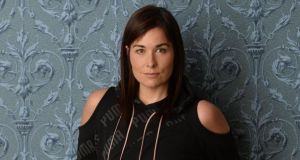 Stefanie Preissner: ‘I’m really happy in my life at the moment. You couldn’t pay me to go back to my 20s.’ Photograph: Alan Betson

When Stefanie Preissner’s publisher asked her to write a book about saying no, she couldn’t but say yes. “I was so flattered I couldn’t say no,” the creator of the RTÉ comedy series Can’t Cope, Won’t Cope says, laughing.

Tentatively titled No. It’s A Full Sentence., it was conceived as a guide to being uncompromising about saying no. Midway through writing it, Preissner had a crisis of confidence.

After talking to her publisher they settled on a new title. Can I Say No? charts the writer’s rocky relationship with that two-letter word, and how being a people-pleaser prevented her from saying it for most of her life. It explores how she learned to prioritise her own needs, and how saying no helped her discover who she really was.

Why are we saying yes to the party and then hoping the other person pulls out? Those were the people I was hoping to access: anyone who thinks saying no makes them less lovable

She was inspired to write the book after observing how she and others were reluctant to say no, lest they be seen as anything other than accommodating and likeable.

“I was, like, ‘Why are we all saying yes to the party and then hoping the other person pulls out?’” she says. “Those were the people I was hoping to access: anyone who thinks saying no makes them less lovable.”

Just don’t call it a self-help book. “I think self-help books should only be written by people who have mastered an issue,” she says. “Saying no is something I still have to contend with on a daily basis.”

It meant always saying yes to sleepover invites, or going swimming in choppy waters against her better judgment. As an adult, it meant driving in the middle of the night to pick friends up from boys’ houses because she had a car.

Preissner remained a yes woman for much of her adolescence and young adulthood. She says women, in particular, are encouraged to be obliging from a young age. She recalls getting hit straight in the face with a ball while playing rounders.

“Because I didn’t cry, I was given a bun,” she says. “I was praised and told I was so good because I didn’t make a scene when I was clearly hurt. That’s a very strange pattern to be putting in the mind of a child... At every stage, we get praised for being compliant, and for being agreeable.”

I want to thank my mam for things like not being there in the morning because she was at work, and showing me that you have to work to live

This bears out in Mother’s Day cards, too, which she says fetishise sacrifice and selflessness above all else.

“All these cards saying, ‘Thanks for everything you did for me’ and ‘Thanks for sacrificing so much for me’,” she says. “That’s not something I want to thank my mam for.

“I want to thank my mam for things like not being there in the morning because she was at work, and showing me that you have to work to live. And taking those lie-ins the mornings she wasn’t working so I now don’t feel like I’m indulgent for being in bed. Or for prioritising herself and her well-being so I have a good role model.”

By the time Preissner reached her mid-20s, she was working on her first play and started saying no to birthday parties, concerts, and gigs. But the more she said no, the more she realised she didn’t have a real sense of self.

Eventually, she decided she couldn’t allow her life to be governed by “no”.

“My life had become very small,” she says. “The things I wanted for my later life were going be impossible if I didn’t start saying yes to some things. If your dream is to drive a BMW when you’re 50, at some point you’re going to have to make time to do a theory test. If you want to be married and have kids, you’re going to have to start talking to strangers.”

These days, Preissner has achieved a happy medium. Having learned about the concepts of introversion and extroversion, she has realised she is a bit of both and takes the time to assess her mood before saying yes or no.

“Then introverted Stefanie is like, ‘I don’t really know if I can deal with the postman today. I’ll just let him send in the delivery notice and I’ll drive to pick it up.’ It’s about learning how to balance those things.”

That means forgoing parties and events every now and again.

The pride I have in being Irish at the moment is reflected back at me when I go abroad to the UK or LA and they’re, like, ‘Wow, so how about those referenda?’ We’re class

It’s not just in her personal life that Preissner has learned to assert her own needs and desires. She has also become more confident and forceful about what she wants in her professional life. For instance, she has resisted moving to Los Angeles or London in favour of staying in Dublin.

“Dublin is a beautiful place,” she says. “She’s just incredible. The next two things I’m writing are set here because she looks great. She’s thriving. The pride I have in being Irish at the moment is reflected back at me when I go abroad to the UK or LA and they’re, like, ‘Wow, so how about those referenda?’ We’re class.

“I feel like in Ireland we have this à la carte citizenship. Yes, we like this. No, we’re changing this. Progress is not immediate, but it’s happening. The power of a whole nation of people saying no to the entrails of the past and the institutionalised, calcified view of homosexuality and of women . . . It gives me vitality, and it makes me want to live here. I love this country.”

Likewise, she has become much more assured in her own creative vision. When she worked on Can’t Cope, Won’t Cope, she says she was green and happy to defer to those with more experience – sometimes to the detriment of the final product. “Now I’m able to advocate for myself a little bit and have more confidence,” she says.

She is currently working on a number of television projects. In addition to developing a series for Paramount Television, she is adapting her first play, Our Father, into a short form television series for BBC Three. No episode will be longer than 12 minutes, and it will be entirely in rhyme.

“My theatre work is all in rhyme and rhythmic verse, so it’s exciting to be bringing that into my TV work,” she says.

At 32, Preissner has enjoyed success as a writer across various mediums – television, theatre, print. With so many projects on the go, she can occasionally lose sight of just what she has achieved. “My ambition stops me from ever stopping in the moment and being like, ‘I f**king wrote a book’,” she says. “I’m like, ‘What’s next? What’s not getting traction? What isn’t succeeding?’”

“Instead of being like, ‘I wrote a book and people are buying it and people are here to celebrate with me’, it’s like, ‘Oh God, maybe they know about the show that isn’t getting made. Maybe I’m failing.’

“My biggest fear is that my greatest successes are in the past and I don’t want that,” she muses. “But I guess it’s how you measure success. I’m really happy in my life at the moment. I’m content. You couldn’t pay me to go back to my 20s.”

Can I Say No?: One Woman’s Battle with a Small Word is published by Hachette Ireland