Rose of Tralee: so safe and smug you just know Donald Trump would approve. Oh look, he does

Talent and ambition are tolerated, but notions are a no-no. Basically, it’s Ireland selecting its fantasy daughter-in-law. 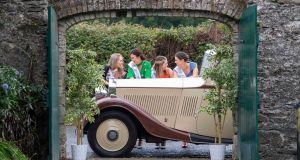 Rose of Tralee: the joy is that no hint of modernity is allowed. Photograph: Domnick Walsh

The Rose of Tralee turns 60 this year. And hasn’t she weathered it well! Doesn’t she have the look of a woman half her age! Maybe this is the year one of the lads from the Garda Band will finally get the knee dirty and make an honest woman of her!

Sorry, sorry. We came over a bit Dáithí Ó Sé there.

In the six decades the Roses have been unleashing their unthreatening lovely-and-fairness on the world, Ireland has changed beyond recognition. But the joy of the Rose of Tralee is that no hint of modernity is allowed within 5km of the festival dome.

Sure, there have been occasional breaks with normal service, such as the opening up of the competition to mothers, in 2008, or Brianna Parkins’s reference to abortion rights, in 2016, but those were anomalies in a soothing sea of Irish dancing and Dáithí’s dad jokes.

The Rose of Tralee festival remains as steadfastly safe as ever – as predictable as the dreary chime of the angelus bells, as edgy as salt in your porridge

The festival remains as steadfastly safe as ever – as predictable as the dreary chime of the angelus bells, as edgy as salt in your porridge.

And that is the key to its longevity. Because to open itself up to modernity would mean it had to confront the central anachronism at its heart: we are, after all, talking about a competition that pits women in their late teens and 20s against one another in a test of general loveliness.

We’re talking about a competition that turns young men into mute, gurning escorts whose job is to carry the Roses’ bags. We’re talking about a competition that puts the entrants on a stage where they get to run through their LinkedIn profile, sing a song or recite a poem and where, if they have a boyfriend, they can expect to be quizzed about their marriage plans. If they don’t have a boyfriend, they may be quizzed about why not.

If it sounds like it’s gas from start to finish, it’s not.

It is not a beauty contest, the organisers insist, but the definition of “loveliness” – the central qualification for Roses – remains as murky as ever. They should have good hair and the good manners to laugh at all of the jokes. Actual talent and ambition are tolerated, but any hint of notions is not. Basically, it’s a chance for Ireland to select its fantasy daughter-in-law.

Everyone talks about how magical it all is, but the real magic of the Rose of Tralee is how it manages to take PhD students and astrophysicists and neuroscientists and transform them with a flick of Dáithí’s cufflink into just a girl in a nice gúna with the obligatory lovely way about her.

And so, in prefestival interviews, the canny ones have been tripping over themselves to insist that – despite the many letters after their name, the schools they founded, the life-saving research they are conducting on rare neurological disorders, the planets they have colonised, or the populations they have enslaved – they are entirely normal, average, nothing remotely special at all.

The Waterford woman who is this year’s San Francisco Rose, Brooklyn Quinn – a student of psychology, criminal justice, and social and behavioural sciences and a tutor of children with autism, but never mind all that – says the festival is “for your average girl, just like me”.

The Abu Dhabi Rose, Karen Cashman, who is campaigning for opt-out organ donation and is popular with the bookies, swears she is a “country girl at heart”. Another bookies’ favourite, the Chicago Rose, Shana Pembroke, gushes that she’s “humbled and thrilled” to be taking part.

Laura Kennedy may work in global investment banking, have toured the country as part of the cast of The All Star Wars, a musical comedy about hurling, and have volunteered at a school in India, but her “one true wish” was to be the London Rose.

It’s all so safe and smug that you just know Donald Trump would approve. (Oh look, he does. He chimed in recently, telling Victoria O’Connell, a Trump International employee, who is the Clare Rose, that she deserved to win, bigly.)

In recent years there have been promising hints that the contestants themselves might succeed in dragging the competition into the 21st century.

First there was Parkins’s challenging the no-politics rule. Then, last year, the Carlow Rose, Shauna Ray Lacey, courageously revealed on stage that her parents had been addicted to heroin. The 2018 winner, Kirsten Mate Maher, got into an Instagram spat with Azealia Banks.

So what’s in store for its 60th-birthday bash? Will it be like all the best 60th birthday bashes: tequila shots, unwise kisses, bitter tears of regret about missed opportunities and ham sandwiches at 2am? Um, no.

Will the organisers respond at last to calls to make the festival more inclusive, to open it up to older women, and to women from a range of backgrounds, identities and life experiences?

“The competition is a reflection of modern Ireland,” says John Drummey of the Rose of Tralee International Festival, announcing that – cue drum roll from the lads in the Garda Band – the age restriction is to be lifted from 28… to 29.

The Rose of Tralee International Festival 2019 is on RTÉ One on Monday, August 26th, and Tuesday, August 27th, at 8pm