Meghan Markle’s Vogue cover is not a triumph, it’s a confused political statement 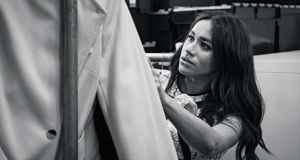 In a way, Markle is an excellent figurehead for the intellectual confusion of our time – loved by some and loathed by others, she preaches one set of values and lives another. The fashion world is abuzz with excitement that Markle guest-edited the most important Vogue issue of the year, its September issue. For its cover, rather than posing herself (which goodness knows would have shifted plenty of units) Markle selected 15 women she considers change-makers, and featured images of them shot by Peter Lindbergh. There is also a blank, mirrored space, to encourage readers to be the face of the change they want to see. Markle is evidently intent on using the platform she has married into to institute positive change.

The problem with this is that Markle is not a magazine editor, politician or activist. She is a duchess; a prominent member of what is objectively one of the most conservative organisations in the world. An organisation to which only blood, matrimony or a solid crack at usurpation can gain you entry, and which has granted her international fame and aristocratic status. It is ironic to push for change after joining an organisation that represents hereditary privilege and which, by definition, sets its members far apart from “common” people.

I actually quite like the British monarchy. That may be strange for an Irish person to say, but provided they don’t get handsy with Ireland again, I really don’t mind them. If – and it is a big if – you can set aside for now the grim history of British monarchy, the royals are easy to enjoy. Although a lot of British people grumble about the cost of keeping them in the Fabergé egg prisons to which they are accustomed, they make far more money for the British economy than they cost.

Their marriages, births and fashion choices appear to be a source of excitement and conversation for British people, and their charitable work brings intense focus to some very worthy causes.

The queen, though, is my favourite. She is a proper wartime woman, frugal and dutiful, and very fetching in a hat. She understands her job in a way that those who will succeed her certainly don’t. The queen is not a person, but an idea. Apart – again, if you can set it apart – from her immense privilege, she is the closest thing in the world to an apolitical public figure. Find me, if you can, the queen’s personal opinion on any pressing issue or political question. I’m sure she has them, but you wouldn’t know.

In an era in which everything is politicised, down to how long you can make eye contact with a colleague and what you drink your morning coffee from, the queen of England is a breath of fresh air. By refraining from getting down into the weeds of contemporary debate or moralising from her throne about how the world should be, she has preserved her bizarre, archaic family structure and status through several national and international crises. It is her job to represent her country, but not to direct it.

I have seen several articles since the announcement of Markle’s Vogue issue lamenting that the duchess is criticised for expressing opinions. She should be – you cannot sign up to a hyper-conservative organisation for life and preach about progressive politics and inclusion between cucumber sandwiches. Markle’s life is a performative contradiction. Her Vogue cover is not a triumph, it’s a confused political statement that serves to remind us all that the British royals don’t practise what they preach – they can’t. Progressivism in women’s magazines is standard and good, but it is not standard or good for the monarchy. In the world Markle aims to build, a monarchy has no place at all.