Rose of Tralee: Sending nude photos or spewing in your handbag doesn’t exclude you

Brianna Parkins: You can do anything you want at the festival, as long as it is good craic 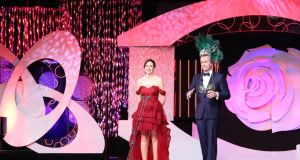 For kids the Rose of Tralee heralds the return of school. For adults, it’s the end of summer and the end of drinking cans in public parks being acceptable.

For me it heralds the emails, tweets and DMs from journalists asking for comment on the festival. Wanting to know if I think the festival is sexist, if it’s outdated, if it’s damaging Irish feminism, if it’s responsible for the housing crisis.

I don’t blame them. As a journalist I’m often on the other side, sending bum-licking emails trying to get someone to say something so I can do a story about it.

But in this case I’m a lost cause. I wrote about my time at the festival. Some of the grammar is a big dodgy but I stand by what I said. The festival should go on; some changes should be made. Mostly it seems to be moving in the right direction, even if this is at the same pace as waiting for a Dublin Bus.

I once wrote that my relationship with the festival is the same as that between Irish mothers and daughters – you can love something and be fiercely critical of it at the same time.

The reality is there’s nothing else in the world like the Rose of Tralee. It’s not Miss Universe. I’ve never seen any of them pass off napkin-folding or milking a plastic cow during the talent section with a straight face on national telly.

I once saw one Irish Rose make a sandwich, which I thought was fantastic, but if I was the American Rose who had just about burst a lung singing an opera solo I would have been raging.

Talent is pushed aside for the willingness to have a go. You can do anything you want, as long as it’s good craic. Which is really the only official rule about living in this country.

Personally I think one of my closest friends, who chose Irish dancing for her official performance, would have been much better off with her true talent in life – passionately arguing her way out of paying cover charges at Harcourt Street nightclubs. She’s been a Rose, an All-Ireland hurler and in Home and Away, according to any of the bouncers you ask.

Just don’t ask me to get misty-eyed about the Rose of Tralee origin story in the song. God knows the song is too long when you’re three wines deep and waltzing in polyester with a partner with no rhythm.

As with most Irish folk songs about young women dying of preventable diseases, I just don’t find it romantic. I do, however, love the factual story behind the festival – a bunch of Kerrymen scheming to get more people to fill up the races and the pubs deciding to hold a competition to get more women into town. Genius.

From what I understand turning not-very-much into a tourist attraction is a proud Irish tradition. This is a country which has been tricking foreigners into kissing a big and probably unhygienic hunk of rock for years.

This is the land of Barack Obama Plaza, essentially a glorified petrol station that attracts thousands of visitors because the former US president may have driven past the site once on his way to get a pint.

There’s a little bit of magic and a whole lot of overconfidence in calling a big tent in a Kerry carpark “The Rose Dome”. But you can’t say it’s not extremely Irish.

With three years gone I remember a few things about being a Rose. Inexplicably getting offered chicken goujons for nearly every meal (great!); feeling confused about whether I should smile or not when I was asked for a photo at Kilmainham Jail on the spot where people were executed (myself and the Derry Rose ended up with a weird kind of grimace – it was one of the only photos I bought because it makes me laugh every time I see it), and that mostly the women who are Roses have changed and the festival is playing catch up (not great).

Most women I speak to who say they could never enter say this is because they feel excluded by the type of femininity they perceive to be required. The type that says you have to have a degree and come from an uncomplicated family. You can’t have spewed into your handbag on the Luas or sent a nude photo.

Most are simply too old. The age cut-off limit has shifted a year, allowing women up to 29 to enter. But it should be older. I’m only just hitting my stride at 29, and I’ll probably be much more interesting to talk to at 40. When I was a Rose at 25 I didn’t know my arse from my elbow about an embarrassing amount of things.

So while we wait for things to change, I’d love to see illustrator (and Kerry woman) Ciara Kenny’s alternative come to fruition.

It’s called the Sound Wimmin festival. Entrants are chosen on soundness. You can wear a ballgown or a tracksuit. It would celebrate every-day soundness, such as those women who give you the bobbin off their own wrists at the gym.

Women caring for children with special needs. Women who have risked being unpopular in the workplace so that younger women wouldn’t have to face the same obstacles they did. The women who volunteer, who check on rough sleepers and keep GAA canteens ticking over. Women recovering from drug addiction. Women just trying to keep it all together.

Something to let them know that we see you and you’re doing a great job. Everyone needs to be told that sometimes.

I love the Rose of Tralee because it’s one of the few places that picks women out of local communities and tells them just that. We just need it to go a bit wider.