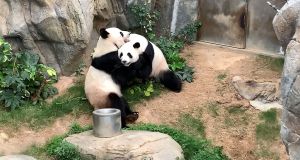 We’re going on a bear hunt

Tiger King, Netflix’s new hit documentary, has got us all talking about big cats in captivity. Or, rather, big cats in Joe Exotic’s private zoo in Oklahoma. An animal-themed trend during the Covid-19 crisis is not quite as dramatic as having tigers and leopards in your backyard, but it does involve bears in Irish people’s houses. Dublin is just one of the cities around the world where people are putting teddies in their windows to entertain children out on their daily walks. And possibly their adult minders too.

More bears in the news. Live ones this time. Ying Ying and Le Le, two giant pandas, have been cocooning together in the temporarily closed Ocean Park in Hong Kong since the city was locked down, weeks ago. The pandas, who have been at the animal theme park since 2007, are usually very popular with the public – only 1,800 or so giant pandas are left in the wild, so seeing one, even in captivity, is special. It’s notoriously difficult for the bears to breed in captivity, however. It seems as if Ying Ying and Le Le took advantage of not having crowds gawping at them all the time, as Ocean Park says they have finally mated. It’s too early to know if Le Le is pregnant, but let’s hope she gives birth three to five months from now – and that, if she does, this happens when her baby sneezes.

We’ve all gone mad baking and mixing and whisking and hunting for flour. I have even made bread for the first time. It took a pandemic, but we’re all bakers now. Here is a recipe for delicious salted-caramel doughnuts from young chef of the year Gráinne Mullins.

It’s one thing being cooped up with family, but being on lockdown with flatmates and housemates brings a whole other set of challenges, especially if you are all also trying to work from home. We like this advice about sharing limited space and bandwidth with people not your nearest and dearest while also being vigilant about hygiene.

The wondrous Literary Hub people, whose website is a treasure house, have been posting amusing tweets each day. This one asks which dead-author quarantine house you’d choose. I’d definitely go for House #1. Just the thought of Judith Krantz asking Oscar Wilde if he has washed his hands after going out shopping makes me happy. Who would you chose to quarantine with?

Put on a happy face

Back when the Ebola outbreak of 2015 required doctors in Africa to wear full protective gear, and so hide their faces behind intimidating masks, someone had the inspired idea of photographing the medics as they normally looked, so they could pin the images of their friendly faces on their scrubs. It’s happening again now. This tweet features doctors in Israel, but medics in many other countries are doing it, too. Let’s hope it starts in Ireland soon. For anyone in hospital with coronavirus disease, frightened and alone, being able to see what the person behind the mask looks like must make a huge difference.

One punnet of strawberries, eight fantastic ways to use them, from cake to ketchup
4