#WagathaChristie: Rooney claims to have caught Vardy passing her private information to a tabloid newspaper 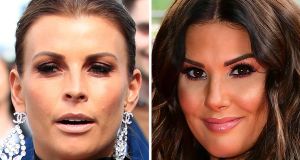 Rebekah Vardy has said she is calling in forensic computer experts to examine who had access to her Instagram account following an extraordinary dispute with fellow footballer’s wife Coleen Rooney over the leaking of private information to the Sun.

Vardy, who was on holiday in Dubai with her footballer husband, Jamie, when the story broke, has denied claims that she provided the stories to the newspaper – despite apparently being caught in an elaborate sting operation that involved Coleen Rooney, wife of former England international Wayne Rooney, posting fake updates to see which appeared in the media.

She denies involvement, although her Instagram account already followed two of the Sun journalists who authored the disputed articles.

The Sun has run dozens of stories about Vardy in recent months, many of them exclusive and some of which were bylined by the same reporters who wrote the stories about Rooney, which were allegedly based on false information.

The paper has not officially commented on the stories, although it covered the row on its front page on Thursday and has emphasised that it followed standard journalistic practice in putting all the apparently fake stories to Rooney’s representatives before publication with a request for comment.

One source at the newspaper insisted they had not paid Vardy for stories about Coleen Rooney, although this does not rule out the possibility of another arrangement.

The dispute shines a light on tabloid practices at an unwelcome time for the Sun, which is already having to deal with its publisher, News Group Newspapers, being sued by Prince Harry for alleged phone-hacking offences. It also highlights how celebrities are increasingly able – and willing – to circumvent traditional media outlets and take them on directly.

Rooney has been dubbed “WAGatha Christie” for her role in the investigation, after the “wives and girlfriends” moniker that was given to the partners of England footballers at the 2006 World Cup.

She published a series of fake news updates on her private Instagram account over the summer and slowly reduced their audience in a bid to identify the leaker. This led to apparently fake articles about Rooney seeking baby gender selection treatment in Mexico, a planned return to television, and a flood at her new-build mansion appearing in the Sun.

On Wednesday Rooney went public, claiming the only account which had viewed the story about the water ingress at her new home belonged to Vardy.

Her representative briefed MailOnline that she has hired “IT experts who can look at the forensics of her Instagram” to identify who else had access in an attempt to clear her name, although it unclear exactly what this forensic analysis would involve. Vardy’s agent did not return a request for comment.

Model Danielle Lloyd, herself the former partner of a footballer, on Thursday told ITV’s Good Morning Britain that she had previously had run-ins “over similar things” with Vardy, also appearing to accuse Vardy of being the author of a Sun on Sunday column entitled “Secret WAG”.

On Thursday Vardy called the new claims “bollocks” and said: “I’m not saying anything more until we’ve finished looking into this situation properly.”

This is arguably the greatest thing that has ever happened in the entire history of the internet.

That’s a bold claim. Yes, but it still stands. Books will be written about the rivalry between Coleen Rooney and Rebekah Vardy. Plays will be staged. Their faces will be carved into mountains.

Why, exactly? You didn’t see? OK, here’s the short version: at 10:29am on Wednesday morning, Rooney tweeted a long and rollicking tale of intrigue via a screenshot from the iPhone Notes app. Someone, she said, had been passing the Sun information contained in her private Instagram stories. So she set a trap.

A trap? Yes. Rooney says she blocked everyone but one person from accessing her stories, and then made up a series of elaborate lies to see if they would still reach the newspaper.

What lies are we talking about? There was a story about her signing up to Strictly Come Dancing, and one about her flying to Mexico to have gender-selection treatment for her next baby. All lies, she says, made up simply to trap the person she suspected. And the stories appeared in the paper.

So, who did she suspect? My God, this is tense. To quote Rooney’s tweet: “It’s … Rebekah Vardy’s account.”

Oh. But that doesn’t matter, because the drama has entertained us all day.

Really? Oh God, yes. Within minutes of this happening, people had mocked up memes of Guess Who? boardgame boxes and Scooby Doo featuring Rooney uncovering Vardy’s identity. And asking what mystery she will uncover next. It’s been amazing.

So people are on Rooney’s side? A million per cent. She’s everyone’s new hero. Wagatha Christie, they’re calling her.

Has Vardy responded to this? Almost immediately. In another screenshot, she denied the claims, pointed out that “I’m not being funny but I don’t need the money”, and claimed that Rooney was the real villain for doing this “when I’m heavily pregnant”.

I’m not convinced. Very few people are. But it’s probably worth pointing out that Rooney isn’t a legally qualified detective, so we shouldn’t necessarily jump to any public conclusions.

What about private conclusions? Are you kidding? Jump away! How could you not? This is the most entertaining thing that has ever happened in the history of the world.

Yes but Brexit. Listen, the planet is a cascade of unending misery right now. Two Wags having an unnecessarily public barney on the internet is exactly the distraction we all need. Give us this, you grump.

Do say: “Coleen Rooney is the world’s greatest detective.”

Don’t say: “But what if they both made this up to trick you into leaking it to the press?” – Guardian