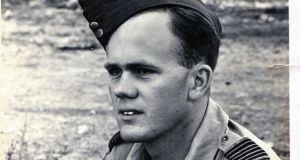 Jack Simpson: he persuaded his mother to let him join the RAF volunteer reserve, which he did in 1939 aged 18

Enniskillen-born John H “Jack” Simpson survived several close calls in the second World War to become one of the youngest wartime wing commanders in the RAF. Amongst them was participating in the first and possibly only naval victory won by the US army tank corps.

Simpson was awarded a Distinguished Flying Cross for his participation in a successful attack under fire on a surfaced U-boat on November 14th, 1942, in the Mediterranean with three other Hudson aircraft of 500 Squadron. As a result of the attack the U-boat (U-595) ran aground.

The crew, which swam ashore, was taken into custody by a US army tank unit. A US intelligence report commented: “The case of U-595 is particularly interesting as it is probably the first naval victory won by the US army tank corps in this or any other war.”

According to the US report, the 20mm anti-aircraft gun on the bridge was manned by a rating while officers sought shelter behind the cowling of the conning tower. The captain let go a steady barrage of advice at the gunner, who finally, in exasperation, shouted “if you’re so damned brave come out here and help me with the ammunition”.

Notwithstanding the captain, the gunner appears to have done a reasonable job as following the attack Simpson landed with about 20 bullet holes in his Hudson aircraft and what he referred to as a “slight nick” on his shoulder.

Yet despite this and other dangerous missions his most serious injuries occurred on December 12th, 1944, when dropping propaganda leaflets of a Churchill speech over Athens , Greece, while piloting a Wellington bomber.

A rifle bullet fired from the ground penetrated the aircraft, passing through his right arm and lung. A compass shattered, spraying shrapnel into his body. Despite bleeding heavily he managed to land the aircraft safely with no ill effects to his crew. However, he was carried from the aircraft, and was hospitalised for over two months in Greece and Italy.

On August 22nd, 1941, during a night take-off from St Eval, Cornwall, in a Hudson with a full bomb load he was half way down the runway when he discovered he had no airspeed or altimeter readings – something of a handicap when attempting to land or take off.

He dropped his bombs in the sea, then circled base to use up fuel and waited until daylight. Without instruments he then landed the aircraft safely if, as he said, a little bumpily”. It turned out that the altimeter and airspeed had been wired incorrectly.

Jack was fulsome in his praise of ground crew during the war, but the individual responsible for that particular error did receive “something of a rollicking”.

A month later, on September 29th, following a flight he was diverted from his base at St Eval due to fog. Short of fuel he had to belly land the Hudson in a field with raised undercarriage. All crew walked away, although the aircraft was a write-off.

Speaking many years later, Simpson believed that bad weather may have contributed to him surviving the war. On February 11th, 1942, the German battleship Scharnhorst and heavy cruiser Prinz Eugen, along with escorts and Luftwaffe cover, broke a British blockade to make a dash from Brest, France, to sail up the English Channel to Germany.

Simpson’s squadron of Hudson aircraft was on standby to attack the battle fleet. However, because of bad weather or failure to sight the target in time his squadron was stood down.

Born May 23rd, 1920, in Enniskillen, Simpson attended Belfast Royal Academy and before that Belfast Model School.

As a teenager, watching aircraft from the RAF base at Aldergrove near Belfast fly overhead, Simpson decided to become a pilot. He wanted to join the RAF to learn to fly, but his mother resisted because of the risks.

However, Simpson showed his determined streak and persuaded her to allow him to join the RAF volunteer reserve, which he did in pre-war in 1939 at the age of 18.

In an interview in 2005 with the BBC second World War People’s War archive, he recalled that he was not politically aware, and that the coming war was not the motivation to join the RAF. “All I wanted to do was to fly aeroplanes.” At the outbreak of the war he was called up.

Simpson became a squadron leader, and on April 23rd, 1945, he was appointed a wing commander at the age of 24, one of the youngest appointments to this rank with 100 aircrew plus ground staff reporting to him.

Despite his war record he received no pension as he had not served sufficient years. However, he did receive a small disability pension.

He had married Phyllis (Nee Kerr) in 1942. Six months later he was posted to North Africa and did not see his wife for a number of years.

In Dublin after the war he worked initially for Avery Scales, before establishing an office equipment business and then an employment agency. He later become secretary general of the Irish Business Equipment Trade Association, where he worked into his 70s.

He served as chairman of the RAF Benevolent Association and chairman and vice-president of the RAF Association Republic of Ireland branch. During this time he introduced Battle of Britain ace Douglas Bader to then Irish president Eamon de Valera.

However, he was forced to close the RAF Association base in Earlsfort Terrace, Dublin, following threats to the building during the Troubles in the North.

He was awarded an OBE in the 2002 Christmas honours list for his charitable services to Irish and UK ex-service men.

He is survived by his son Ronnie and daughter Wendy