Ross O’Carroll-Kelly: ‘No, Sorcha. I’m going to Japan. The team needs me’ 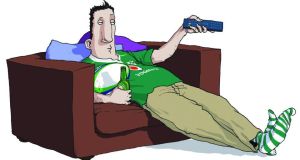 ‘The airport? I don’t know where you get your ideas from!’

Sorcha is busy baking. Yeah, no, Mount Anville are planning to create a giant school logo made up of thousands and thousands of green and white, gluten-free cupcakes, on the main hockey pitch, which they’re then planning to film using a drone – although I can’t remember why exactly?

It’s either to get into the Guinness Book of Records – or just, well, because.

She’s going, “I can’t believe that Honor has left me to do this,” pretending that she’s not secretly delighted. “Okay, that’s exactly one hundred cupcakes made. I think I’m definitely going to keep going – although I will need more icing sugar.”

And that’s when my phone all of a sudden rings? It ends up being JP. He’s at the World Cup in Japan – and having the time of his life, if his inability to string words together to form an actual sentence is any indication.

You’re going to ask me if I’ll change my mind. You know the reason you’re not allowed to go

I laugh. I’m there, “Dude, you’re horrendified! Put someone on who can talk?”

A second or two later, there’s another voice on the line. I recognise it straight away. It’s Breffni – this dude we all know who lives over there?

He’s like, “Ross O’Carroll-Kelly, how the hell are you?”

That’s one of the many things I love about rugby – its ability to unite people from different backgrounds. Although I wouldn’t leave anything valuable lying around if I had people from Terenure sleeping on my floor.

Breffni goes, “And all anyone keeps asking is: when is the Rossmeister arriving?”

I’m there, “What? Seriously?” because I’ve got a sudden case of FOMO.

“Yeah, no,” he goes, “everyone’s like, ‘It’s not officially a World Cup until the Rossmeister General gets here! That’s when it’s all going to kick off!’”

I look at Sorcha. I’m there, “The thing is, Breff – The Breffster, The Breferee, The Breffinator – there’s a possibility that I’m not going to actually make it to Japan?”

He just laughs. He’s there, “Dude, get your orse over here. There’s room for you in my aportment. Well, there isn’t – but you can stay anyway!”

Then he hangs up.

Before I manage to get a word out, Sorcha goes, “The answer is no, Ross.”

She’s there, “You’re going to ask me if I’ll change my mind. You know the reason you’re not allowed to go.”

Yeah, no, I do. I found out that our thirteen-year-old daughter had been secretly driving around in my cor and I didn’t bother telling Sorcha – portly because I didn’t want to worry her, and portly because I thought she might be good for the odd lift. It’d be nice to have someone to collect me from The Bridge who doesn’t want to lecture me about my drinking?

What ever happened to trust in our marriage, Sorcha?

Sorcha goes, “I’m not changing my mind, Ross, and that’s the end of the matter,” and then she goes back to her KitchenAid.

I tip upstairs to find Honor standing on the landing.

I’m there, “I’m just saying, Honor, I don’t want you to feel guilty about any of this.”

She looks at me like she thinks I’m insane. “I don’t feel guilty,” she goes. “I’m a sociopath, remember?”

“But I can’t believe you’re being such a wuss about this.”

“Er, letting her tell you what you can and can’t do? If you want to go to Japan, then just go.”

“Your mother would never forgive me.”

“Er, I think she’s forgiven you for a lot more than that.”

I laugh. She’s actually right. But it’s what she says next that ends up actually flooring me.

She’s there, “Go and get your passport. I’ll drive you to the airport.”

And the weirdest thing happens then – as in, my body goes into, like, automatic pilot mode? Without even thinking about it, I end up doing exactly what Honor tells me – I go and grab my passport – and the next thing I know we’re heading north on the M50, with Honor driving and me sitting in the front passenger seat, booking my flights to Tokyo, with a return date of the day after the final, because I’m nothing if not an optimist.

We’re just pulling up outside Terminal 2 when – again – my phone all of a sudden rings? I can see straight away that it’s Sorcha.

Sorcha goes, “Where are you?” and she doesn’t sound like she’s in any mood for my bullshit.

I’m there, “I’m in, like, Dalkey Village. You mentioned that you needed icing sugar.”

I’m there, “The airport? I don’t know where you get your ideas from!”

She goes, “I can see where you are, Ross. I’m using the Find My iPhone app to track your movements.”

I can’t tell you how angry this suddenly makes me. I’m there, “What ever happened to trust in our marriage, Sorcha?”

And Sorcha’s like, “Hold on – is she driving you?”

I’m there, “Technically, no, because she’s just pull in to a loading bay.”

Sorcha ends up totally losing it. She goes, “Oh my God, Ross, this is the worst thing you have ever done to me!”

I’m like, “Jesus Christ, Sorcha, I slept with all your bridesmaids – and your sister. I know I shouldn’t be giving you ammunition but I’m just trying to introduce a bit of perspective here.”

“Get in the driver’s seat and come back here – now!”

“Ross, you are not getting on that plane.”

“It’s too late. I’ve got a ticket for the match against Samoa. I’ve got my passport in my pocket and my flight booked. If you’re looking for me during the next – hopefully – two-and-a-half weeks, you’ll find me sleeping on the legendary Breffni’s floor.”

I’m there, “There’s nothing you can say to change my mind, Sorcha.”

And that’s when she goes, “Ross, your passport expired in May.”