Róisín Ingle: How I met Matt Damon. And it wasn’t in Dalkey

The star has been posing with fans in Dalkey, where he’s riding out the pandemic 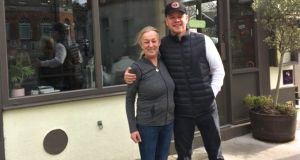 Everyone has a Matt Damon story. Well everyone in a specific 2km geographical radius of Dalkey, anyway. The Hollywood star of Contagion and other films is apparently riding out the pandemic in one of the most affluent areas in the whole of Ireland, poor creature. He’s been spotted jogging around the area and posing for photos with fans.

Inevitably, there are rumours doing the rounds. Rumour Number 1: While here Damon is helping Sian Smyth and her husband Irish Times columnist David McWilliams curate the next instalment of the Dalkey Book Festival.

Rumour Number 2: The Martian star is releasing a charity song with Dalkey local Chris de Burgh. A duet of A Spaceman Came Travelling, is what my impeccable sources are telling me.

Apparently the “Bruce Springsteen Is Stuck In Co Clare After Attending a Wedding” story turned out to be an April Fool’s joke, so it’s nice that we have at least one celebrity in Lockdown Ireland because of coronavirus.

Damon was here for his latest movie, The Last Duel, which is set in medieval France but is mostly being filmed in postmodern Ireland. At an extras casting call in Dublin last February, Damon – who wrote the movie with his mate Ben Affleck – and director Ridley Scott were looking for these kinds of people:

He’ll be grand for “bone thin” types but not sure if he’ll find many dentally-challenged people in Dalkey where, if Irish Times columnist Ross O’Carroll-Kelly is to be believed, all residents have teeth so white they’d blind you and most limbs intact.

Everybody has a Matt Damon story. Even me. A few years ago I ended up at a celebrity-filled gathering I should not have been attending. I was invited by mistake by someone who thought I’d enjoy the party. When I arrived, delighted with myself and speeding nonchalantly – it’s an art – to the free bar, there was mild panic when, on spotting me in the crowd, organisers worried I might, as an unscrupulous, hard nosed, ruthless journalist, be bothering the A-listers or even the B-listers for the chats.

There were no other journalists present. It was a shindig where celebrities were hoping to let down their hair extensions and go mad on the dancefloor without fear of being observed. In fairness, I could understand the organiser’s fears. I am partial to a good chinwag with a random celebrity. There was that time at a music festival when I told a very good looking woman doing her make-up that she was a ringer for Winona Ryder. Later, I discovered it was actual Winona Ryder. Or the time, early in my journalistic career, when I met half of the Hothouse Flowers at the ATM in Sandymount and forced them to talk to me for 20 minutes. I have form is what I suppose I am saying.

Anyway, I promised the organisers I would curtail my celebrity-bothering instincts and in return I was allowed to stay at the party and order as many free double Jack Daniels and cokes as my heart desired. I was as good as my word.

I did not tell Noel Gallagher why Whatever is my favourite Oasis song. I did not ask Bono to be on my podcast. And it took all my womanly restraint not to ask Imelda May whether she fancied being a special guest at my singing night sometime.

As the night wore on I became prouder of my newfound ability to leave celebrities alone. I mean, I didn’t even say hello to Panti Bliss and I actually know her in real life. And in case any of the organisers saw it happening, a very friendly and down-to-earth Larry Mullen sat down when I was on my fourth large Jack Daniels and started talking to me. Not the other way around. I have witnesses.

In the early hours of the morning, I was wrecked from all the celebrity-avoidance and needed to use the bathroom. So, studiously ignoring everyone who looked vaguely recognisable, I went up to a tall man in a baseball cap who was standing on his own.

“Excuse me,” I said. “Do you know where the bathroom is?” It was only when the man with an American accent began to speak that I realised I was, in direct contravention of all instructions by the powers-that-be at the party, asking Hollywood legend and star of one of my favourite films Good Will Hunting Matt Flipping Damon for directions to the jacks.

That’s how “Jesus Christ, not you Matt Damon” became the only words I have ever or probably will ever speak to Matt Damon before I scuttled away to locate the toilet on my own.