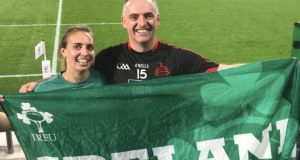 David O’Connor thought the Covid-19 pandemic had put a stop to his fledgling business recruiting English-speaking teachers to work in China. “It started to look like this very bad investment. I thought, who’s going to come to China now? The virus had taken hold. Hits on the website had gone right down. Candidates that I had been talking to were emailing going: ‘Can I put my application on hold?’”

In fact, the pandemic has had the opposite effect. After the initial Chinese shutdown, O’Connor has had enquiries to his business from teachers all over the world looking for opportunities in China to escape the uncertainty of the near-global lockdown. “Whether it’s out of choice or pragmatism, China is suddenly looking very attractive to a lot of teachers.”

A teacher from Co Waterford, O’Connor has been living in Beijing for three years with his wife, Laura Malone, from Co Clare, who is also a teacher. Six months ago, he left his job as headmaster of a kindergarten in Beijing to set up China By Teaching and fill a gap in the market by bringing native English-speaking teachers to China. Initially the business was going well, and then the virus hit. “I had five teachers ready to place in jobs in China in February, and four pulled out,” he says.

At the time, he and Malone were on a delayed honeymoon in South Africa and Botswana, from where he continued to work remotely, interviewing and placing teachers. “Even before we left China, we heard rumours there was this virus in Wuhan. At first we thought it might be a local outbreak, but while we were away things unfolded very fast.”

The couple decided not to go back to China, instead taking flights to Thailand and Kuala Lumpur, where they could stay with friends and wait the virus out.

But then Covid-19 began to spread around the globe, with an unexpected effect on his business. Suddenly the applications were flowing in again from teachers from Ireland, the US and Dubai who wanted to go to China.

“This week alone, I placed two teachers in four days in jobs in Beijing. Normally, if I place every two weeks that would be positive. A guy has a second interview on Monday. I’ve never been this busy. They’re in their home country seeing that they don’t have a guaranteed income anymore, and that the opportunities in China are good.”

A fully qualified teacher in Beijing can earn €4,000 a month after tax; for a teacher with a Tefl qualification only, it’s about €3,000.

As of Thursday, however, the business has been thrown into more uncertainty. “The situation is so fluid. Things are changing fast. China has now stopped all foreign nationals entering the country temporarily.”

This has had a more immediate knock-on effect: he doesn’t know when he will see his wife again.

Last weekend, they parted ways in Kuala Lumpur: she needed to return to her job as a teacher and flew back to their home in Beijing. He flew to Ireland to renew his visa. When they booked her flight, they thought she would have to self-isolate at home. But the rules changed, and she is now spending 14 days in quarantine in a hotel in Beijing, while he’s on the other side of the world, self-isolating at his sister’s house in Crumlin, to make sure he doesn’t bring the virus with him to his family in Waterford.

In Beijing, Malone is in isolation in a hotel room she is not allowed to leave. They’re talking every day via Skype. “She has her ups and downs. It sounds class on paper. She’s staying in a four-star hotel. But it’s not free – she has to pay the room rate for 14 days. It’s costing about a thousand euro. Her school are being very good, and they are going to reimburse her for that.”

The isolation is proving hard going. “They come to the door, they knock, and the tray is left outside. She’s not allowed out at all, not even for fresh air. There is one contact person that speaks English in the hotel if she needs anything. She has said how kind and friendly the staff are at the hotel, and how well she’s being treated. They have been very good to her and she feels lucky.

“There are 30-something foreigners there, they’re all in a WeChat group; they have to take their temperature twice a day, and they put it into the WeChat.”

He’s trying to focus on the positives. “We’re in a relatively lucky situation. She’s working at least. There are lots of people here now that aren’t. I can look out the window of my sister’s house and see the white vans parked up on people’s driveways. Obviously we don’t want to be apart, and that’s hard. But there’s a lot of people in [a] lot worse situations.”

Meanwhile, back in China, life is returning to normal. “Schools are due to open in May. My friends who are still there have gone back to playing soccer in the park, they’re going to restaurants and beginning to socialise again. They’re turning back to a semblance of normality.”

Juggling a newborn, a toddler and a daughter with special needs in lockdown
6